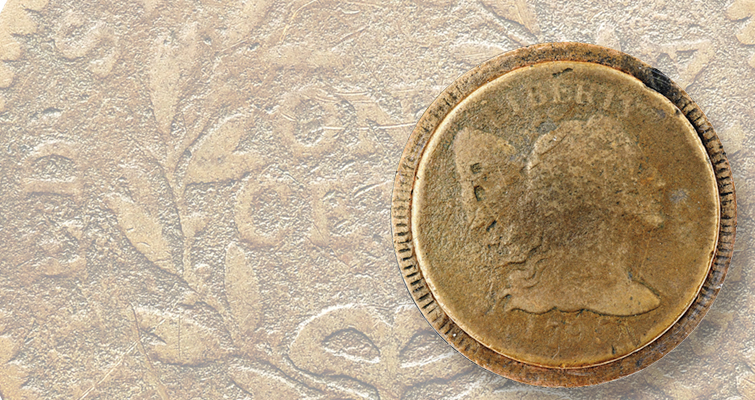 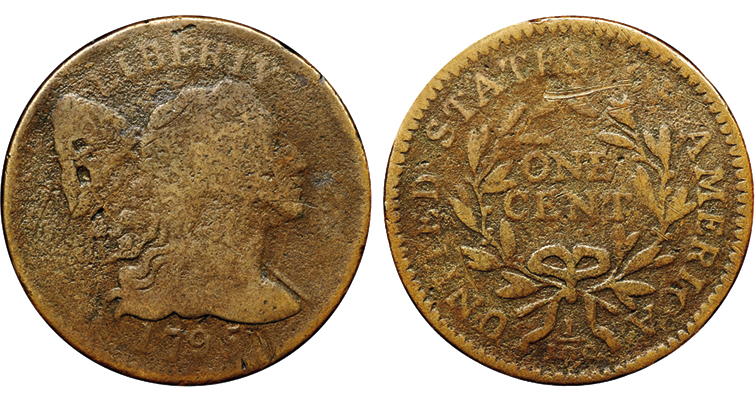 The Reeded Edge variety of 1795 Liberty Cap cent is known in the numismatic community by just 10 examples.

The L.R. Davis McKinney Jr. example of the 1795 Liberty Cap, Reeded Edge cent hasn’t been part of the numismatic mainstream since the late Texas collector/dealer offered the coin in a fixed-price list in 1964.

The McKinney coin, one of 10 examples confirmed of the Sheldon 79 Reeded Edge variety, is scheduled to cross the auction block Jan. 7 during Heritage Auctions’ sale held in conjunction with the Florida United Numismatists Convention in Tampa.

The identity of the consignor has not been disclosed by Heritage.

The coin is graded and encapsulated by Numismatic Guaranty Corp. as Very Good Details, Corrosion. Approximately half of the original edge reeding remains on the McKinney S-79 coin.

The purpose of the edge reeding is unknown, but some large cent experts have speculated the reeded edge was executed as an anti-counterfeiting device. Other large cents of the era also bore edge devices of several different types.

Walter Breen, in his Complete Encyclopedia of U.S. and Colonial Coins, suggests the reeding was “an experiment which proved to be a needless frill, adding to the cost of manufacture without compensatory advantage.”

The common edge device for many early large cents was the incuse inscription ONE HUNDRED FOR A DOLLAR.

According to www.largecents.net, “The genesis of the 1795 Reeded Edge Cent can be found in President George Washington’s January 26, 1796 proclamation to reduce the weight of the Cent from 208 grains to 168 grains. The proclamation was to be retroactive to December 27, 1795, on which date President Washington had already issued verbal orders to Mint Director Elias Boudinot to make this weight change.

“The exact date on which the 1795 Reeded Edge Cents were struck in unknown, but since all known examples appear to have been struck on 168-grain planchets, they must have been produced no earlier than December 27, 1795.

“Sheldon-79 features the same reverse die that the Mint later paired with the first six obverse dies for the 1796 Draped Bust Cent (S-106 through S-111).”

The S-79 variety is considered by many large cent experts to be the rarest among nearly 300 early U.S. large cents 1793 to 1814 attributed by Sheldon number in Penny Whimsy by William H. Sheldon.

The S-79 die marriage is also considered to be rarer than 14 of the Sheldon NC or “noncollectible” varieties, so attributed because of the scant number of confirmed examples.

None of the known 1795 Reeded Edge cents is in high condition. The finest known example of the S-79 variety is graded Very Good 10 by Professional Coin Grading Service. This example was originally discovered in 1915, offered in a B. Max Mehl sale, and recorded as the third example known. The finest known coin realized $1,265,000 when it was sold at auction Sept. 6, 2009, by Ira & Larry Goldberg Coins & Collectibles as part of the Dan Holmes Collection of Early Date Large Cents. The price realized included a 15 percent buyer’s fee.

For the Holmes sale, the coin’s grade was PCGS VG-10.

The Holmes coin was the first U.S. copper coin to break the $1 million barrier at auction.

The lineages of known 1795 Liberty Cap, Reeded Edge cents began in 1862 when an example was described as appearing with a “Milled Edge,” according to the Heritage lot description for the McKinney coin.

A second example, which surfaced in an April 1890 W. Eliot Woodward catalog, is now part of the collection of the American Numismatic Society.

What is now referred to as the “House of Davis McKinney” specimen was acquired by McKinney sometime before 1964, according to Borckardt.

The S-79 1795 Reeded Edge cent first appeared for sale in McKinney’s Jan. 25, 1964, fixed-price list, where it did not sell at that time. McKinney conducted more than two dozen mail-bid sales in the 1950s and 1960s, according to Borckardt.

Sometime prior to the listing, according to Borckardt, McKinney mailed to coin to Sheldon, who authenticated the piece and assigned a grade of Good 5.

Borckardt has also assigned the grade Good 5 for the auction lot listing, based on Early American Coppers grading standards and the opinions of other veteran large cent specialists.

Large cent researcher Del Bland recorded the coin in his condition census from the 1964 mail-bid sale listing for the variety, although Bland never physically saw the coin, according to Borckardt.

The example has been recorded as “untraced” in every condition census published since then, according to Borckardt.

McKinney, who died March 30, 2015, wrote the following description of his 1795 Reeded Edge cent more than 50 years ago, according to Heritage:

“227. 1795. The Very Rare Reeded Edge. The obverse die of this variety, i.e., Sheldon 79, was not used on any other variety of large cent. In our opinion it resembles the workmanship of 1794, more than cents of 1795. The reverse die was used on one variety in 1796. It is furthermore our opinion that while this variety does not constitute a pattern, the workmanship is indicative of an experimental piece. Very Good. We feel this lot measures up to the Sheldon plate coin, especially with the entire ‘toothed’ border of the reverse quite bold. Almost as rare as the ‘famed’ Strawberry Leaf Cent. Extremely Rare. We definitely regard this lot as a four-figure lot item, though will consider partial trade. In point of rarity and condition, it rates favorably with a VG Silver Center Cent, without silver plug, recently valued at $3,750.”

According to Heritage, 11 different firms or individuals have handled or owned two different examples of the 1795 S-79 variety.

The McKinney coin is the fourth of the 10 known examples to be handled by Heritage at auction.