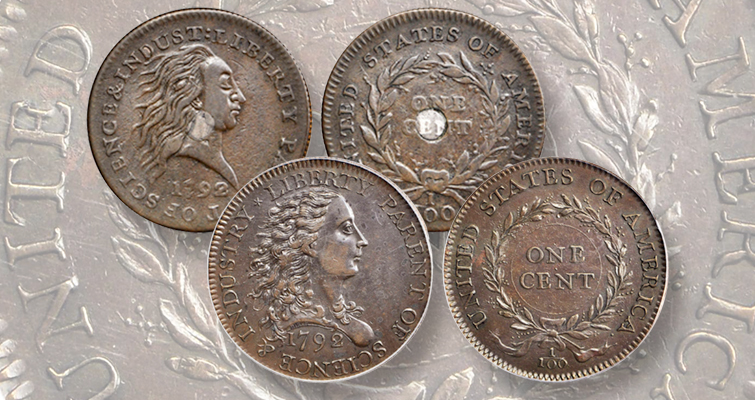 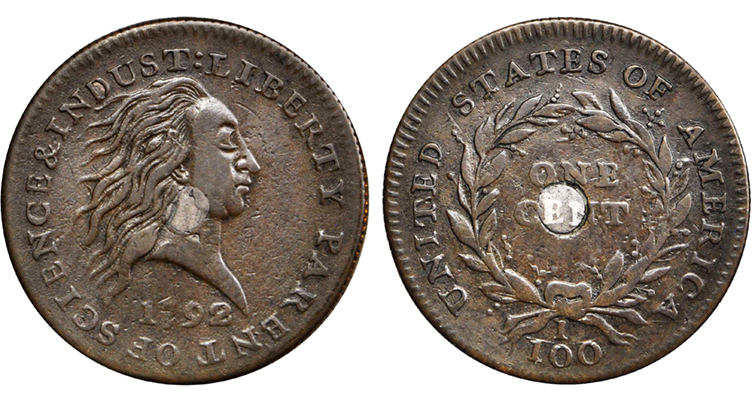 A Judd 1 example of 1792 Silver Center cent, graded Specimen 45 by PCGS with a green CAC sticker, is a highlight of the Archangel Collection. 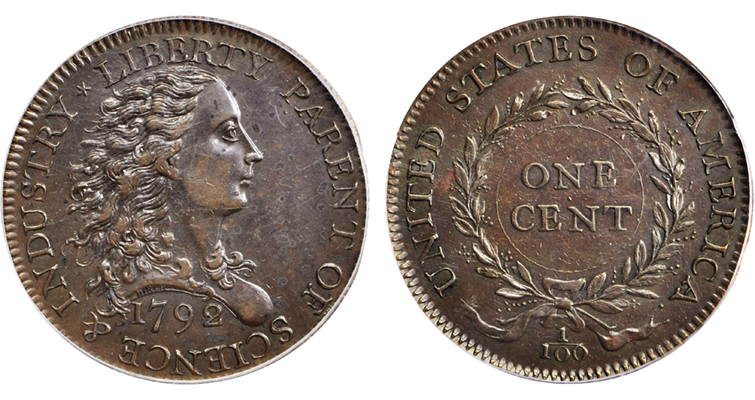 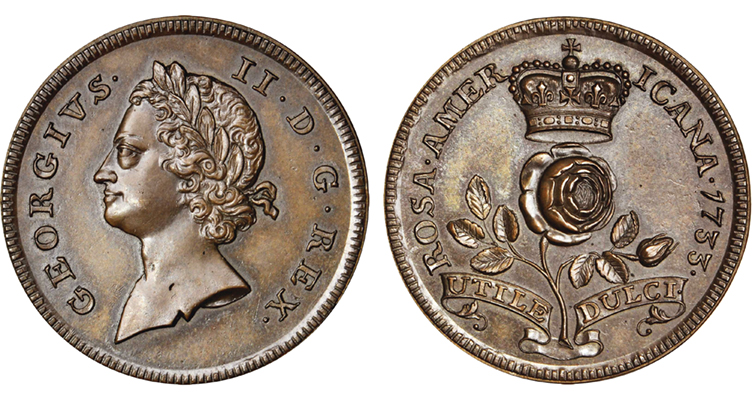 One of five known 1733 Rosa Americana pattern twopence pieces, graded Proof 64 brown, represents “a final exclamation point” to William Wood’s series and a rare opportunity to purchase a rarity that has been off the market since 1980. 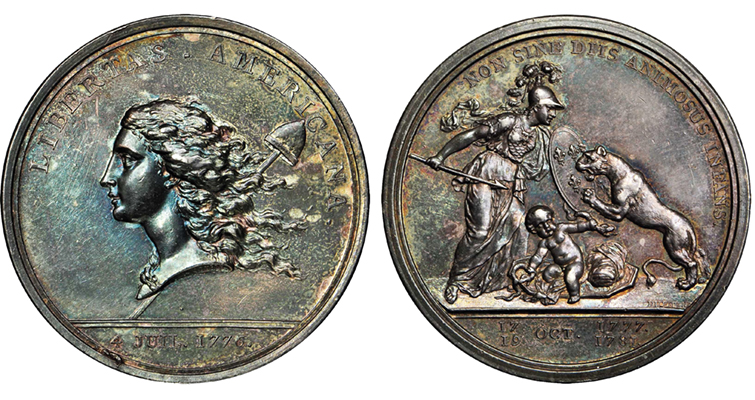 The silver Libertas Americana medal was last offered in a 1976 auction. Today the silver medal is graded MS-62. 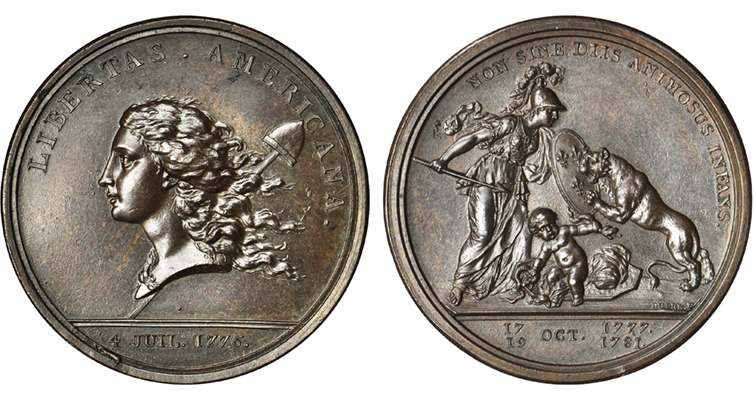 The bronze Libertas Americana medal in the auction is graded MS-63 brown.

Stack’s Bowers Galleries calls The Archangel Collection of Colonial Coins and 1792 Coinage “one of the last great fresh-to-the-market collections of superb quality early American coinage.” It will be offered on Oct. 26 as part of Stack’s Bowers Galleries’ official auctions of the Whitman Coin & Collectibles Expo at the Baltimore Convention Center, Oct. 25 to 28.

The anonymous private collector worked with Stack’s to assemble the collection between 1974 and 1984, “an era that was rich in private treaty opportunities and numismatic auctions that disgorged colonial rarity after colonial rarity, allowing the building of the previously unheralded collection presented in this catalog,” as the introduction states.

“Coin after coin of astounding rarity, quality and pedigree” coming from major collections of the era are included in the 155 coins offered, though Stack’s Bowers concedes, “In a collection of this sort, picking favorites is a mine field, as all coins stand tall on their own merits,” reminding bidders that the collection was assembled even before most current collectors of colonial coins had discovered the field, and before third-party certification (slabbing) was developed.

The 1792 half disme is graded Mint State 63 by Professional Coin Grading Service and has a green Certified Acceptance Corp. sticker. It was last offered publicly at an April 1978 Stack’s sale in New York City.

A presumably unique 1792 Birch, Plain Edge cent, listed  as Judd 3 in Dr. J. Hewitt Judd’s classic series reference United States Pattern Coins, was last offered at a May 1976 Stack’s auction. Today it is graded About Uncirculated 58 by PCGS. Stack’s Bowers writes, “The Birch cent is, simply, the first of a cultural phenomenon that is known the world over: it is the first American cent. The offered coin has a provenance that goes back to the mid-19th century and includes a stint in the Judd collection.

Judd 1 1792 Silver Center pattern cents are always popular because of their sheer oddness: since early copper cents (like the Birch cent) would have to be physically large to contain a cent’s worth of copper, the early Philadelphia Mint experimented with adding a silver plug to reduce the cent’s size while still keeping the intrinsic value. The Archangel Collection’s example is graded Specimen 45 by PCGS and has a green CAC sticker, with the catalog noting, “The eye appeal is natural, essentially choice, and excellent for the grade. Both sides show a wealth of fine detail despite light wear.”

Today 14 Silver Center cents are known and despite its historical importance, examples are missing in most major numismatic museum collections including the British Museum, the American Numismatic Society and Colonial Williamsburg. The example in the auction was formerly owned by Dr. Judd, served as the plate coin in previous editions of Judd’s book, and was placed in the Archangel Collection by Maryland dealer Julian Leidman.

Concluding the offering of four 1792 patterns is a Judd 10 1792 copper disme graded PCGS AU-58+ and bearing a green CAC sticker that is one of perhaps 19 bronze examples known today, along with three 1792 silver dismes.

Among the issues popularly collected under the Colonial coins category is a 1733 Rosa Americana pattern twopence that is one of just five examples known. The Rosa Americana coins were issued by William Wood, who secured a patent from England’s King George I to make tokens for Ireland and the American colonies. He issued his money in three denominations: half penny, penny and twopence, with a common obverse design showing the head of King George I. The typical reverse of the circulation issues has an open rose with the text ROSA AMERICANA UTILE DULCI (American Rose — Useful and Pleasant).

Wood died in 1730 and the twopence pattern, with its obverse depicting a bust of George II facing left, was issued by the successors to Wood’s coinage patent. The reverse depicts a more elegant rose than seen on previous issues, with a delicate stem, but widespread production of the new twopence was not to be. As the cataloger put it, the Proof issue — this one graded Proof 64 brown by PCGS — is a “beautiful example of the single greatest rarity in the Rosa Americana series, coined after the death of William Wood as a final exclamation point before his coining patent was allowed to expire.” Indeed, it was struck nearly a decade after the last mass production of Rosa Americana pieces intended for daily use in the early colonies.

The planchets for these Proof strikings were carefully prepared and the portrait of George II is of unusually high quality for the era. The offered example has an ownership history that traces back to the mid-19th century, and in an 1871 sale it was described as “a gem, worthy of the most determined competition among American collectors. Its possession is of the utmost importance, as it is a pattern for a coin which was strictly American in character.”

It spent time in the collection of Sylvester S. Crosby, and is plated in Crosby’s The Early Coins of America, Plate IV, 16. It was offered in the sale of the Lorin G. Parmelee Collection in June 1890 by New York Stamp and Coin (David Proskey and Harlan Page Smith) as lot 553 where it sold for $275. For reference, that price was higher than a 1792 George Washington gold eagle that brought $220. The gold eagle — which some believe to have been George Washington’s pocket piece — sold this August at Heritage’s 2018 American Numismatic Association World’s Fair of Money Auction for $1.74 million.

The Archangel Collection closes with two undated (1783) Libertas Americana medals: one in silver graded PCGS MS-62 and another in bronze graded PCGS MS-63 brown. Stack’s Bowers explains, “No other medal in the canon of American numismatics is invested with so much history and importance as the Libertas Americana medal,” with Augustin Dupre’s obverse design directly inspiring the Liberty Cap design found on the first coins of the Philadelphia Mint.

The reverse depicts complex imagery of the infant Hercules strangling a snake, protected by Minerva shielding the vigorous infant from a lioness. Minerva represents France in this allegory, protecting the infant America from Great Britain, whose tail is curled between its hind legs. The obverse carries the date July 4, 1776, and the reverse celebrates victories at Saratoga and Yorktown. The medals are now thought to have been produced in 1783.

Estimates of surviving populations vary, but perhaps 25 to 30 silver examples are estimated today alongside around 150 bronze medals. The catalog description accurately observes, “Having been distributed non-numismatically, many have been mishandled, and examples this fine are legitimately rare.” Both were last on the market in 1976, when they were offered together as lot 889 at Pine Tree’s sale of the John Carter Brown Library Collection. Although the silver examples are rarer and much more expensive, Stack’s Bowers writes, “Bronze was Franklin’s preferred format, and for many collectors who are attracted to the Libertas Americana medal’s historic connection to the designs of our earliest copper coins, they are in full agreement.” 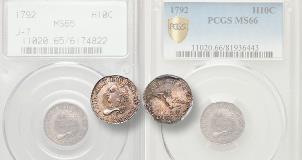 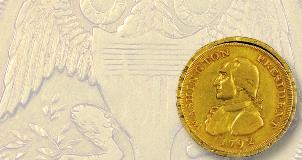