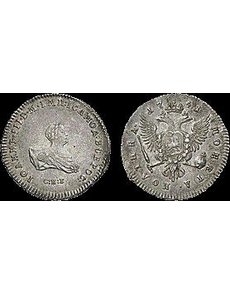 Following the Numismata show in Munich, the firm (in the same city) has scheduled sales 203 to 205 on March 5 to 8, conducting its annual spring auctions.

The 1741 silver poltina of John III, struck at the St. Petersburg Mint, has an extremely rare edge variant, according to the firm. Its edge displays two different edge types, with about 70 percent of the edge milling bearing the mint inscription, and the rest featuring a deeper milling that was customary for coins of Anna, the immediate predecessive ruler.

The coin is just one of more than 5,000 lots scheduled to cross the auction block in four days with a combined estimate of about €3.2 million (about $4.2 million U.S.).

A buyer’s fee of 15 percent applies to all successful bids.

The firm offers live bidding via the Internet, but registration must be completed in advance of the auctions.

Catalogs may be viewed or downloaded at www.gmcoinart.de/kataloge and also may be ordered from the firm.

Roman Republic, Octavian, 43 B.C. gold aureus, minted in Gallia Cisalpina, “after Octavian marched to Rome in July and before the triumvirate was installed in autumn when he held the consulship for a short period of time,” Lot 312, Good VF.