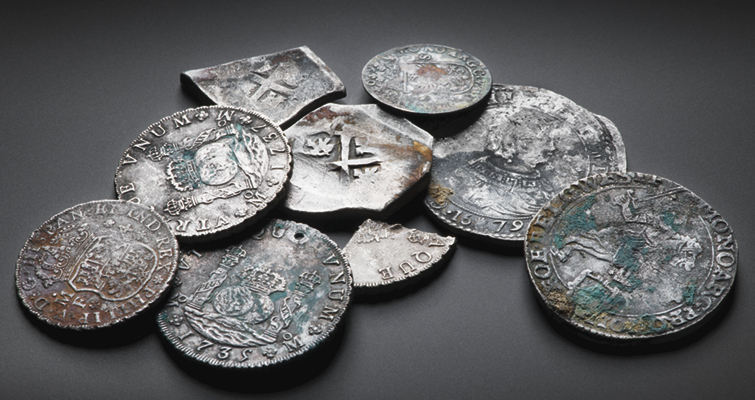 A collection of the different coins that were found in the wreck of the Rooswijk, a Dutch ship that sank off the coast of England.

The Goodwin Sands — also known as “the great ship swallower” — is a 10-mile sandbank at the southern end of the North Sea lying six miles off the coast of Deal in the English county of Kent.

As the sandbank is close to the Straits of Dover with its major shipping lanes, many ships have been wrecked upon the Goodwin Sands. One of the most notable was the Rooswijk, a Dutch East India Company (in Dutch: Vereenigde Oostindische Compagnie, abbreviated to VOC) vessel, which came to grief in January 1740.

The disaster claimed all 237 passengers and crew, its cargo consisting of a large quantity of silver in the form of ingots and coinage, and blocks of stone and iron bars. The cargo is believed to have been worth 300,000 gulden. While this sum is difficult to quantify in our money, rest assured it was and is sizable.

The ship was outward bound for Batavia (today, Jakarta) where its cargo would be exchanged for Asian goods including spices and porcelain.

Now a protected wreck site, the remains of the ship and its cargo, its crew and their personal possessions, as well as the everyday items they used, lies at a depth of some 85 feet.

The site was originally found in December 2005 by a sports diver, and the wreck was partially excavated by the Culture Heritage Agency of the Netherlands and Historic England, working with an archaeological dive team. The finds were handed over to the Netherlands’ finance minister, representing the Dutch government, as the heirs to the VOC.

Since 2016, Dutch and British archaeologists have worked together with the maritime archaeological company MSDS Marine to carry out an investigation of the site. Although there were 250 VOC shipwrecks, only a third have been located, and this is the first one to have been scientifically researched and excavated on this scale.

The silver cargo was in the form of ingots, cob money, “pieces of eight” (a common term for Latin American 8-real coins, which were also known as Pillar and Spanish dollars).

These were minted to a recognized standard weight (1 ounce) making them perfect for international trade.

The presence of these coins was to be expected, but the archaeologists found lots of other, older coins at the wreck site, including ducatons from the Dutch Republic (a confederacy formed in 1581 by several Dutch provinces) and the Southern Netherlands (now Belgium) that were not part of the sanctioned cargo. This indicates that those on the Rooswijk were smuggling extra silver to trade illegally in Asia.

Other coins found during the dives have small holes in them. To the archaeologists, this indicates that the crew sewed them into their clothes to smuggle them to the Dutch East Indies, thus concealing them from fellow sailors as well as the authorities.

At this time people were also concealing silver in their shoes and belts. The smuggling of silver was prohibited by the VOC. However, it is believed that as the mid-18th century approached, up to half the money being transported on such voyages was being smuggled.

Identification of the crew

As all the records of the passengers and crew were lost in the shipwreck and until the recent research, only the name of the ship’s skipper, Daniel Ronzieres, was known.

Genealogists in the Netherlands have been able to positively identify and name 19 members of the crew from documents held in Amsterdam City Archives.

Those identified range from a senior surgeon who had made return voyages to Asia on several occasions (Gerrit Hendrik Huffelman); a 19-year-old on his first VOC voyage (Thomas Huijdekoper) and a sailor who had previously survived a shipwreck on the Westerwijk at the Cape of Good Hope (Pieter Calmer). Most of the men on board the Rooswijk were born in the Netherlands, but some had German, Swedish or Norwegian backgrounds.

The identifications were possible from two document types. The first were “transport letters,” which were used by VOC crew to allow third parties (mainly wives) to draw part of their salary during a voyage.

In days of sailing ships, sending money home from Asia was not a practical alternative. Such letters would name the ship and give the date of its scheduled departure. It was possible to find other individuals as a result of them visiting a civil-law notary prior to setting sail to have the signatures on a last will and testament witnessed. Wills also named the vessel on which the journey was to be made.

Martijn Manders, the Dutch project leader, said, “The Rooswijk is special because it tells us about ordinary people of the time, but also about entrepreneurship and (trade) relationships that ensured connections between cultures all over the world. We consider this to be shared cultural heritage. We therefore work closely with our counterpart Historic England. Our British colleagues are now mainly working on the conservation of the finds in Portsmouth, which is a very important part of the project. The finds help us to tell the story of the people on board, we can relate specific personal objects to what they did in general; how they lived, what the circumstances were on board the ship.”

Duncan Wilson, chief executive of Historic England, said, “It’s extraordinary that after more than 270 years, we now know the names of some of the people who may have lost their lives with the Rooswijk. Sea-faring was a dangerous way of life and this really brings it home. The revelation that the Rooswijk was used to smuggle silver adds to our understanding of global trade at the time — we shall have to wait and see what else we might discover from the site in the coming months.”

Finds from the dives

The fact that shipwrecks are also graves is brought home by the discovery of two tibia (leg bones) from two individuals.

There is potential for the discovery of more human remains. During this year’s dives (which will continue to mid-August) more personal items have been discovered alongside barrels in the galley behind the main mast.

A “knee” — a huge piece of angled wood used to support the deck — has been uncovered and will be investigated and recorded to illustrate the enormous size of the ship.

The team is working toward the stern of the ship. As the team has made progress, a nit comb, a lead cheese container, pewter vessels and a small chest full of thimbles are some of the personal items that have been conserved since their recovery from the wreck site. Material recovered from the wreck site is being taken ashore to a warehouse in Ramsgate where first-aid conservation is carried out and the items are fully recorded.

From there finds will be taken to a Historic England’s storage facility where work to assess, analyze and conserve them will take place. The finds will then be returned to the Netherlands and, in future, some material may be made available for display in Ramsgate. 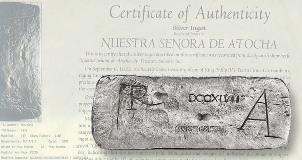 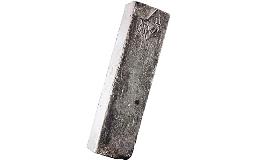 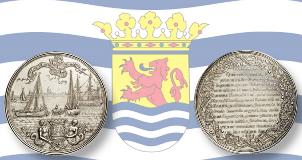