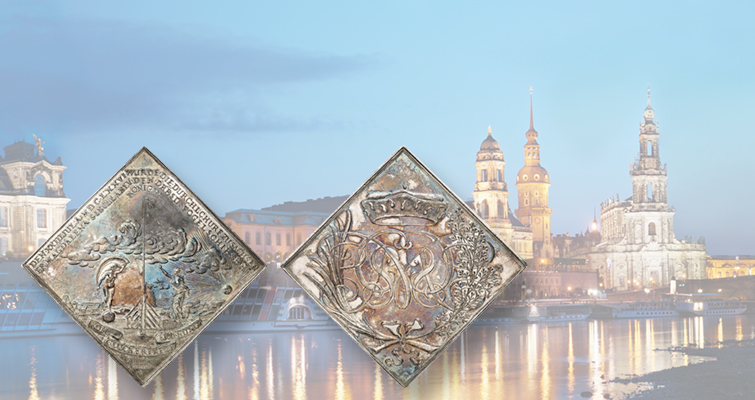 This rare silver medal was presented to Saxony’s prince for winning a shooting competition in Dresden.

Shooting competitions were popular in German-speaking lands, and late in the 16th century, it became fashionable to issue medals for the winners.

A highlight of Fritz Rudolph Künker’s auction No. 267, during a week of auctions from Sept. 26 to Oct. 2, is one such medal, a marquee silver example of the shooting talers or shooting medals from Saxony.

In these shooting competitions, the winning marksmen received the so-called “Schützentaler” or “Schützenmedaille” as gifts for their shooting prowess.

Shooting societies first sprang up in cities during the late medieval period, as a result of citizens training to defend their right of freedom. Weapons such as bows, crossbows and early gunpowder weapons were easy to use for defending the walls of a fortified area during a siege.

Before the practice of issuing medals was adopted, hunting societies and members of nobility issued golden necklaces that served a similar fashion, according to Künker.

The medals typically list the date and place of the single shooting competition together with symbols such as rifles, targets and wreaths for the winner.

No place was more prolific with a variety of shooting medals than the Electorate of Saxony.

When he made the winning shot, per custom, his mother (Magdalena Sybille) became the “Schützenkönigin” (queen of shooters) and received for this honor a gold example of this medal, which is said to have weighed 46 ducats (about 160 grams).

The obverse of the medal shows, among other imagery, the “Vogel,” a wooden bird with a target on a high pole, at which the marksmen would shoot.

The reverse carries an intertwined MSC, the initials of the prince’s mother and her title, in German (electress), with palm and laurel branches.

The medal is one highlight from the Roland Grüber Collection. Grüber for more than two decades built a collection of coins and medals related to Brandenburg in Franconia.

The medal weighs 86.3 grams and is in Extremely Fine to Uncirculated condition, according to the auction house.