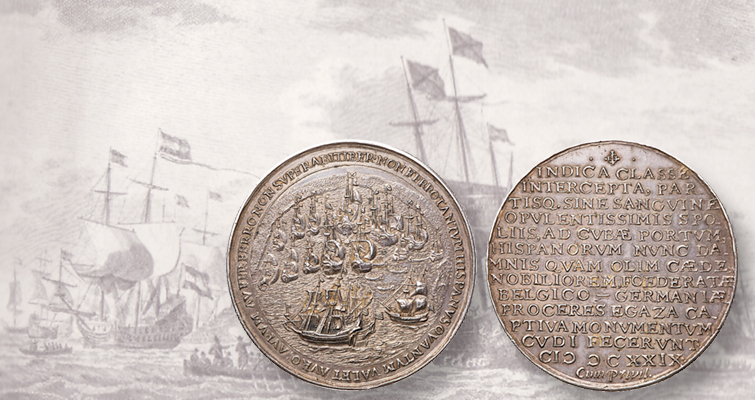 A silver medal from the 1628 capture of the Spanish fleet in Cuban waters highlights the New York Sale’s Jan. 5 and 6 auction.

The Dutch defeat of the Spanish treasure fleet on Sept. 9, 1628, along the coast of Cuba was celebrated with a silver medal struck from the spoils of victory.

An example of this medal highlights the New York Sale auction XXXVII on Jan. 5 and 6.

A reported 177,000 pounds (weight) of mostly silver and some gold treasure was captured during the swift victory at Matanzas Bay, Cuba, which occurred with no loss of life.

The Spanish, aware of Adm. Piet Heyn’s presence, were starting to unload the silver when Heyn’s fleet arrived at the bay at Mantanzas. Heyn met little resistance, was taken to Vice Adm. Don Juan de Benavides and accepted his surrender.

The Dutch commissioned medals from the loot in 1629, and the result is a piece classified as a Betts medal, named for the American Colonial History Illustrated by Contemporary Medals catalog created by C. Wyllys Betts.

The obverse of this medal (Betts 25) features a panoramic view of the peaceful naval scene with ships and rowing boats crowded into the bay, Heyn’s flagship to the fore, and an unbroken shoreline beyond without mountains.

The reverse features a 14-line inscription that boils down to the Dutch thumbing their nose at the Spaniards, including a line that translates to “very rich booty taken without bloodshed.”

The medal measures 58.87 millimeters in diameter and weighs 58.41 grams.

The fleet that was captured at anchor was part of a large Spanish fleet carrying treasure from Spain’s New World colonies to Europe. Such fleets were prime targets for competing nations and pirates, and millions of pesos were captured over the years.

Piet Heyn’s fleet had already harassed the larger fleet and had captured a number of vessels at sea before the vessels resting in the bay were acquired.

The total value of the captured treasure was worth about 12 million guilders.