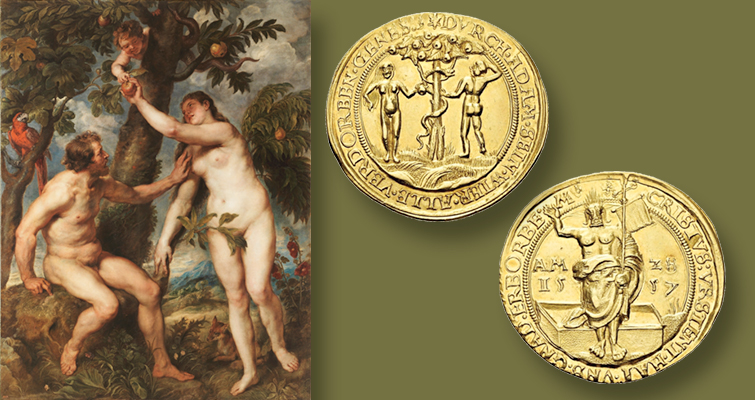 A rare gold medal made in 1557 in Germany tells the biblical story of Adam and Eve and the Garden of Eden.

Adam and Eve and the story of the Garden of Eden is familiar to people around the world of Abrahamic faiths.

A depiction of this paradise-dwelling duo appears on a rare 16th century gold medal being offered in Hess-Divo’s Dec. 6 auction in Zurich, Switzerland.

The 1557 medals was created in eastern Germany, presumably by Michael Hohenauer, in the Erzgebirge mountain area (which was home to several medalists).

It depicts the biblical topics of original sin and resurrection. Adam and Eve can be seen at the Tree of Knowledge on the obverse side of the medal, while the reverse shows Jesus Christ standing with his raised right hand, holding a cross flag in the left hand. A sarcophagus is shown in the background.

The obverse also carries a reference to Genesis where Adam and Eve are discussed, though the wording is not a quote from an actual Bible passage.

The abbreviated inscription on the reverse of the present medal causes some confusion and has often been associated, in numismatic research with the death of the Margrave Albrecht II Alcibiades of Brandenburg-Kulmbach on Jan. 8, 1557, in Pforzheim. However, this interpretation must probably be rejected, since, apart from the year 1557, there is no concrete connection to Margrave Albrecht, the auction house said.

While many biblically themed medals came from the Erzgebirge mountain region in Germany, biblical quotations on these medals are usually reproduced accurately, the auction house said.

The medal has a lengthy provenance, having been traced to an auction in Munich in 1925. 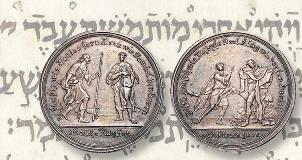 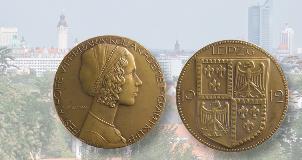 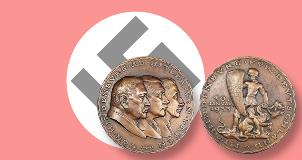