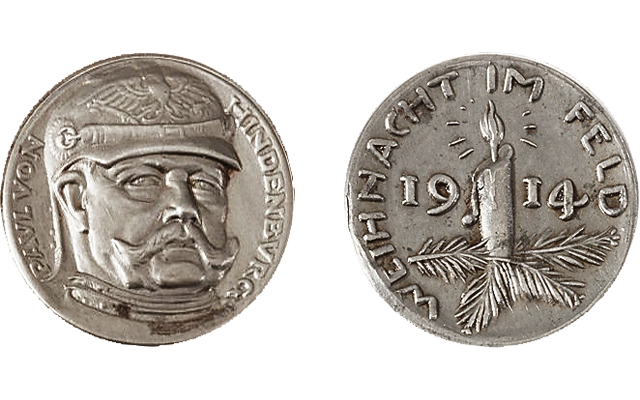 German medallist Karl Goetz created a series of medals during World War I highlighting the sacrifice of soldiers. The 1914 medal, whose images are shown here from the hubs used to create them, features one candle to mark the first Christmas of the war. That Christmas, a temporary truce broke out on the battlefields of Flanders.

The holiday is a special time for so many folks, but times of war present particular difficulties for Christmas celebrations.

A 1914 medal by a famous German artist is a reminder of a famous incident that occurred during World War I that year.

Karl Goetz a prolific medalist, created many pieces having a biting, satirical edge, but a wartime Christmas medal series he created has a more somber tone.

The 1914 medal was the first in a series of annual issues released through 1918. On each, various German military and political leaders appear on the obverse, while the reverses depict one, two, three, four or five candles, each relating to the year of the war. The first four medals bear a legend translating to “Christmas at the front,” but the final medal’s legend translates to “Christmas at home.”

Though engaged in war, that Christmas German and British soldiers experienced the famous Christmas truce in 1914.

A spontaneous truce erupted on Christmas Eve, as soldiers on both sides of battle near Flanders, Belgium, erected Christmas trees and decorations, while singing Christmas carols. Some soldiers reportedly sent gifts to their enemies a few dozen yards away.

A momentary peace settled on the combatants, and the cease-fire lasted several days, before commanders demanded the warring factions rise anew.

The 1914 medal, while not specifically commemorative of that moment in war, carries the weight of the famous pause in combat, making it an appropriate addition to the Coin World  “12 Days of Christmas” list.

No precise sales record for this medal was found, but a 1915 medal sold in recent months for $125 by New York dealer Paul Bosco, who said that price is on target for the 1914 version as well.