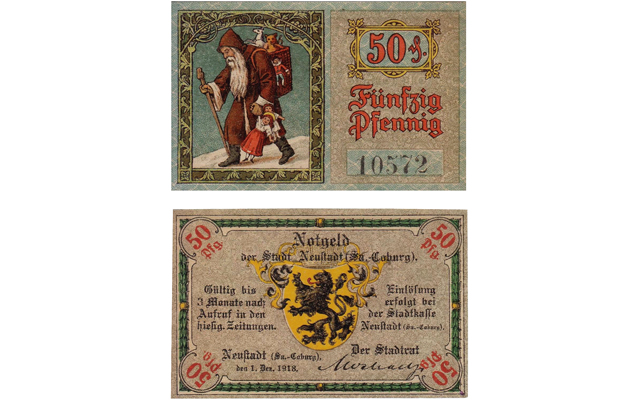 Notgeld circulated in Germany (and other German-speaking lands) during and after World War I. Later issues, like this 1918 note, were of a more commemorative nature. Santa Claus trudges through snow to make his appointed rounds on this 50-pfennig note from Coburg, sold by Bob Thomas, eBay id bctmi.

While Jesus is the religious focus of Christmas, Santa Claus is the center of secular attention.

Though the form and name of Santa Claus (or Saint Nicholas) vary throughout the Western world, the story of a gift-bearing traveler is a major component of the legend around the world.

Given his significance in delivering holiday spirit, it’s only natural that Santa Claus would make an appearance in numismatic fashion.

And so he does, mostly on multiple modern coins with mintages in the thousands, targeted at collectors.

But there is a little-known segment where Santa may be found with a touch of history.

In Germany during World War I , inflation ran rampant and money was short, so a class of substitutes called notgeld (literally meaning “emergency money”) soon appeared to fill the gap. Notgeld includes porcelain and metal tokens, but most issues were paper.

By war's end, many of these issues transitioned into a commemorative purpose, and from 1919 to 1922 abundant issues were released to capitalize on the desire for attractive designs with meaning.

Literally tens of thousands of pieces of paper were printed, and many examples show scenes indicative of Christmas.

A 50-pfennig note from Coburg, dated Dec. 1, 1918, shows Santa Claus trudging through the snow to make his appointed rounds, gifts in tow for eagerly anticipating children. An example sold in an auction on eBay.com that closed Dec. 7 (along with a 25-pfennig note lacking a Christmas design) for $31.76, including shipping.

There are undoubtedbly many other possibilities to consider in selecting just one paper notgeld for your own “12 Days of Christmas” list.