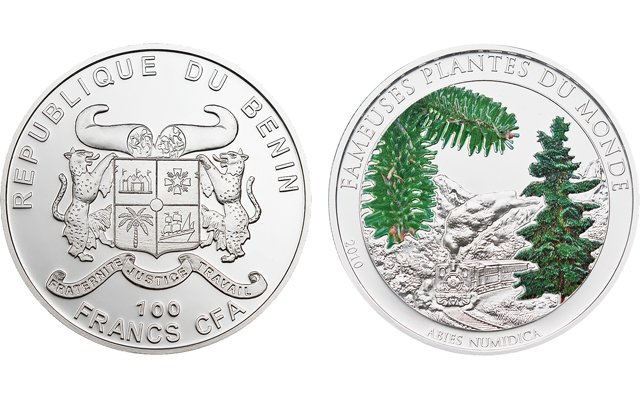 Get a whiff of this — Benin’s 2010 100-franc coin is pine-scented, giving collectors a chance to enjoy that Christmas tree smell without worrying about cleaning up any needles.

The “12 Days of Christmas” song is a well-known and widely performed song of the Christmas season.

Its place in popular culture and lore may be witnessed by the amount of publicity generated by an annual tally of what the items the song lists would cost for a would-be gift-giver, which for 2014 is reported to be $27,673.21.

Coin World decided to review the hobby and pick 12 items for our own list, though not necessarily one requiring multiple purchases a la the song.

So, no five golden coins here!

If every item on our list (including a few more affordable options) were purchased, the tally would reach approximately $18,129.75. U.S.

In the days leading up to Christmas, we’ll share each component of the list, and the story behind why the piece was chosen.

The custom of Christmas trees began in Germany in the 1500s, before spreading to England and the United States in the 1800s.

Whether once alive or fake plastic, trees are usually decorated with ornaments, lights, glitter and “toppers” like a star or angel.

For collectors who want to experience the fresh scent of an authentic or organic Christmas tree, a 100-franc coin from the Republic of Benin in West Africa is the perfect option.

The Proof copper-nickel coin features .999 fine silver plating, as well as two colorful highlights of evergreen trees. It is not necessary to rub the coin to smell the trees; just open the capsule in which the coin is housed and the scent wafts right out.

With a reported mintage limit of 2,500 pieces, and the color and scent, this coin is clearly directed toward collectors (but, it doesn’t need watering!).

The U.S. distributor, Talisman Coins, continues to offer it for $49.95.