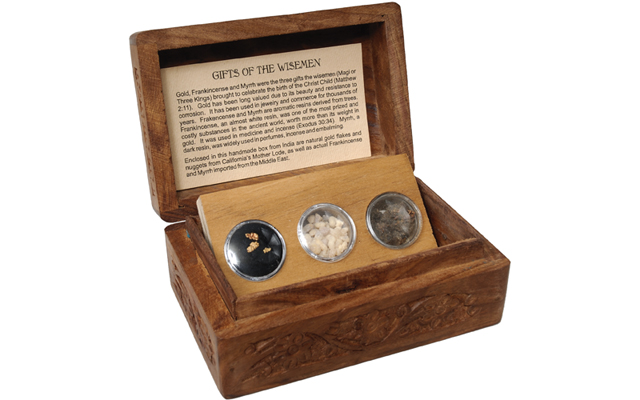 Collectors attempting to give a gift with a little originality could consider the “original Christmas gift” of gold, frankincense and myrrh. The substances, famously the gifts of the Three Wise Men in the biblical story, come in a hand-carved box imported from India.

Collectors looking for a Christmas gift with a touch of authenticity need look no further than the original Christmas gifts: gold, frankincense and myrrh.

Gold, frankincense, and myrrh were the three gifts the Wise Men (also called The Three Kings or Magi) brought from the east to celebrate the birth of the baby Jesus, as reported in Matthew 2:11.

Though many people have heard of frankincense and myrrh and have even sung about them in Christmas carols, few have actually seen, let alone owned, these precious substances.

Gold has long been coveted for its beauty and value. Frankincense and myrrh are aromatic resins extracted from rare trees.

Frankincense, an almost white resin, was one of the most prized and costly substances in the ancient world, worth more than its weight in gold. It was used in medicines and incense, according to Exodus 30:34.

Myrrh, a dark resin, was widely used in perfumes, incense and embalming.

Included are California-mined gold flakes and nuggets as well as frankincense and myrrh resin imported from the Middle East.

While only partially numismatic (thanks to the gold), this set is too neat not to include in Coin World’s “12 Days of Christmas” list.