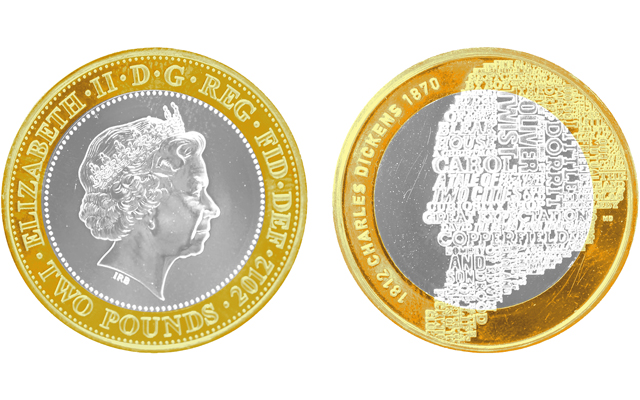 No modern work of literature is more associated with Christmas than one that bears the holiday’s name in its title.

A Christmas Carol, by English author Charles Dickens, is retold today in movies, plays and on television, relating a lesson of growth and appreciation as the miserly Ebeneezer Scrooge transforms into a charitable man after being visited by ghosts of Christmas past, present and future.

In 2012, the Royal Mint issued a circulating £2 coin to celebrate Dickens’ birth bicentennial.

Artist Matthew Dent’s reverse features a profile of Dickens created out of titles of his works, including David Copperfield, Oliver Twist, Great Expectations and A Christmas Carol, among others.

The portrait was based on a bust of a bearded Dickens that is part of the collection of the Charles Dickens Museum in London. The typography that gives the portrait its form uses several different typefaces, from ones that would have existed during Dickens’ lifetime to several designed since his death, “symbolic of the enduring popularity of his work,” according to the Royal Mint.

That’s enough to earn this coin a spot in Coin World’s “12 Days of Christmas” listing.

The coin has a face value equivalent to about $3.14 U.S., though collectors may opt to buy one of the special editions in precious metal or Proof finish for a higher price.