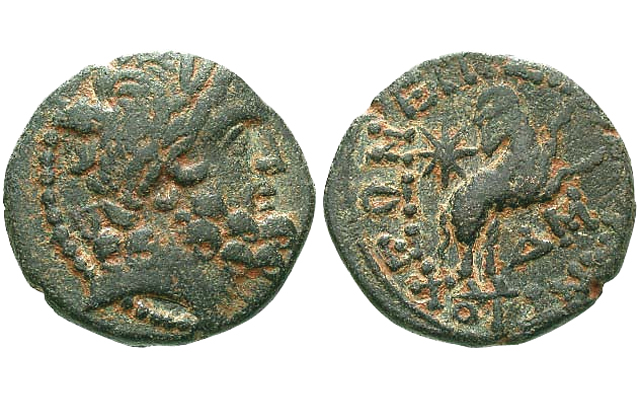 The Star of Bethlehem guided travelers to visit the newborn Christ child. Astronomer Michael Molnar presents evidence that the reverse of an ancient bronze coin of Silanus depicts the astronomical event referenced around the time of the birth of Christ. The coin images were provided by www.forumancientcoins.com.

The biblical Star of Bethlehem most likely was Jupiter’s occultation (eclipse) of Aries in 6 B.C., according to collector and astronomer Michael Molnar.

Molnar believes a bronze coin of Roman Syria, issued by Quintus Caecilius Metellus Creticus Silanus, who was governor of Syria from A.D. 13 to A.D. 17, depicts the celestial event described as the Star of Bethlehem.

Molnar presents his case in a book titled The Star of Bethlehem: The Legacy of the Magi, which has been acclaimed by other astronomers and translated into several languages.

Molnar explains that Aries (a ram) was the sign of the Jews, and that ancient stargazers would have watched for the Star of Bethlehem in Syria.

According to Molnar’s website, Jupiter underwent two occultations (“eclipses”) by the Moon in Aries in 6 B.C. Jupiter was the regal “star” that conferred kingships, he said. The second occultation on April 17 coincided precisely when Jupiter was “in the east,” a condition mentioned twice in the biblical account about the Star of Bethlehem.

In August of that year Jupiter became stationary and then “went before” through Aries where it became stationary again on Dec. 19, 6 B.C. This is when the regal planet “stood over” — a secondary royal portent also described in the Bible.

A Roman astrologer confirms that the conditions of April 17, 6 B.C., were believed to herald the birth of a divine, immortal, and omnipotent person born under the sign of the Jews, according to Molnar.

“The coins of Antioch and ancient astrological documents show that there was indeed a Star of Bethlehem as reported in the biblical account of Matthew,” Molnar wrote.

The bronze coin of Silanus is often identified as the “Star of Bethlehem” coin and commands a retail price of $100, even in worn or dug condition. Molnar’s book, at $20, is a more affordable option.

Its likely connection to the celestial event that heralded the Christian savior earns its place in Coin World’s “12 Days of Christmas” list.