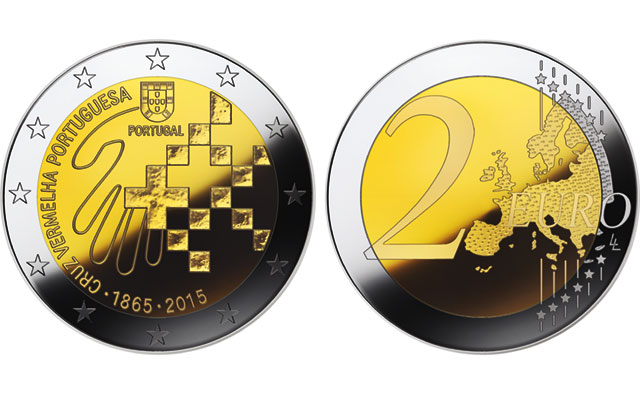 Portugal will issue a circulating commemorative €2 coin in 2015 to mark the 150th anniversary of the Portuguese Red Cross. 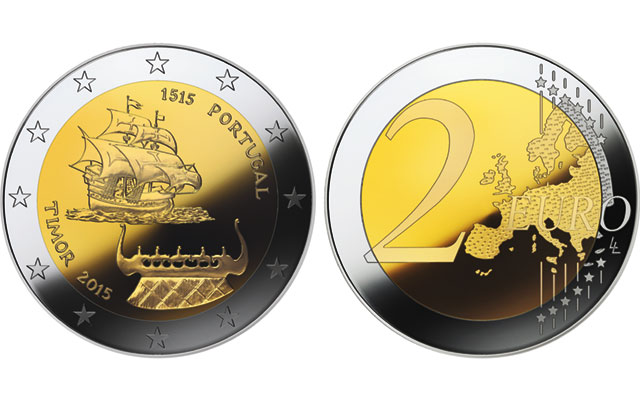 Portuguese explorers first visited Timor in 1515, and the Portuguese State Mint will issue a circulating commemorative €2 coin in 2015 to mark the 500th anniversary.

The obverse of Red Cross coin, designed by Antonio Marinho, shows a hand reaching out with the famous Red Cross symbol stylized into a pattern. Legends in Portuguese encircle the design.

The Red Cross coin is expected to be released in April. It will have a mintage limit of 500,000 pieces. Two special collector versions will be issued, in Brilliant Uncirculated and Proof, with 10,000 mintage each.

Timor is an island in Southeast Asia, that is divided between East Timor and a portion of Indonesia.

The Timor coin shows a sailing vessel from Portugal paired with an image representing Timor, possibly showing a wooden carving.

The year dates and each nation’s names fill the central design on the obverse.

Fernando Fonseca designed the obverse of the the Timor coin, which is scheduled for release in July, with the same mintage limits and special version as the Red Cross coin.