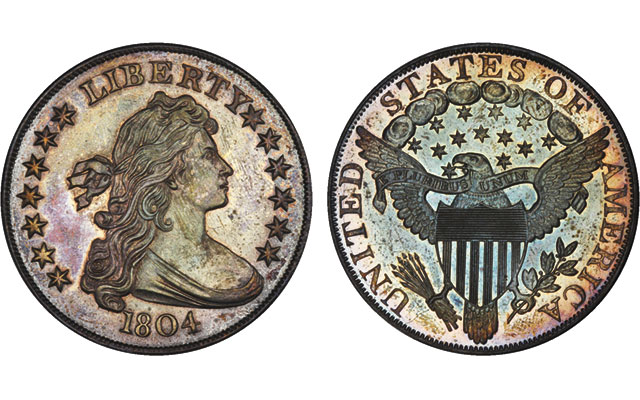 The Dexter Specimen of the Class I 1804 Draped Bust silver dollar from the D. Brent Pogue Family Collection will be on exhibit during the Jan. 29 to 31 Long Beach Expo. 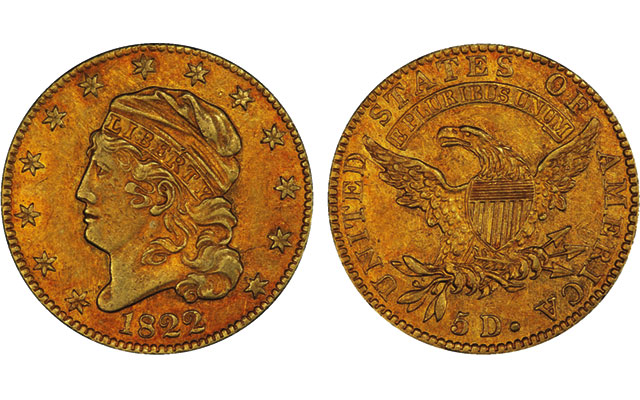 One of three known examples of the 1822 Capped Head gold $5 half eagle, from the Pogue Family Collection, will be on public display during the January Long Beach Expo.

The following is a press release from the Long Beach Expo:

The historic coins will be among the PCGS-certified Pogue Family Collection items displayed by Stack's Bowers Galleries at their booth (#502) during the three-day show. Stack's Bowers and Sotheby's will jointly offer the collection in a series of auctions starting in May.

"The 1822 Capped Bust Half Eagle is one of the greatest numismatic treasures of the United States," stated David Hall, Co-Founder of Professional Coin Grading Service (www.PCGS.com).

"United States Mint records indicate that 17,796 $5 gold coins were produced in 1822, but today only three survivors are known. Two of them are part of National Numismatic Collection in the Smithsonian's National Museum of American History," explained PCGS President Don Willis. "The Pogue coin is the finest of the three, and is graded PCGS Secure™ AU50."

Legendary collector and Baltimore, Maryland banker and financier, Louis E. Eliasberg Sr. purchased the coin from dealer Abe Kosoff for $14,000 in 1945. Pogue bought it for $687,500 in 1982 at "The United States Gold Coin Collection" auction of Eliasberg coins conducted by Bowers and Merena (now Stack's Bowers).

There also are only three known 1854-S Coronet Head Half Eagles, and one of them is part of the Smithsonian's holdings. The Pogue coin, graded PCGS Secure AU58+, also was formerly in the Eliasberg Collection. Mint records indicate only 268 $5 gold coins were struck at the San Francisco Mint in 1854.

Ron Guth, President of PCGSCoinFacts.com (www.PCGScoinfacts.com) states: "The 1804 Silver Dollar is one of the rarest and most popular of all American coins, despite the fact that none were made until 1834 and several were even made many years after that!"

The Long Beach Explo will be in the Long Beach, California Convention Center, 100 S. Pine Ave.  Public hours are Thursday and Friday, January 29 and 30, from 10 am to 7 pm, and Saturday, January 31, from 10 am to 5 pm.  Admission is $8 for adults, $4 for seniors and children aged 8 to 16.  However, free admission coupons are available in advance online.

"Simply go to our website, www.LongBeachExpo.com, click 'Get Passes,' and enter the special Promo Code, PRJAN15.  Then print out the free admission coupon and present it at the show's registration desk," said Long Beach Expo President Cassi East.

For additional information, including the schedule of events and a list of attending dealers, visit online at www.LongBeachExpo.com, call the Long Beach Expo at 888-743-9316 or email at LBExpo@collectors.com.