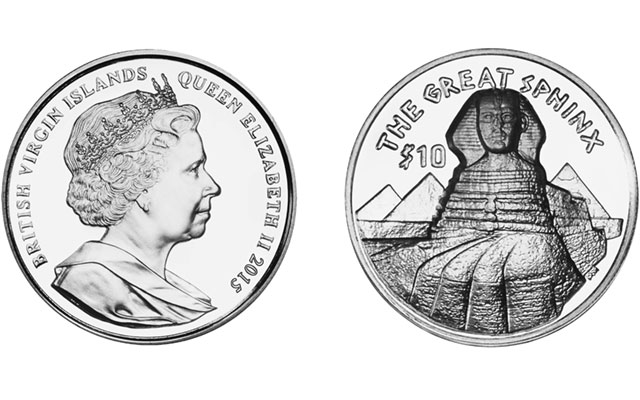 The Pobjoy Mint has issued a 2015 silver Proof Ultra High Relief $10 coin for the British Virgin Islands showing the Great Sphinx in Egypt. 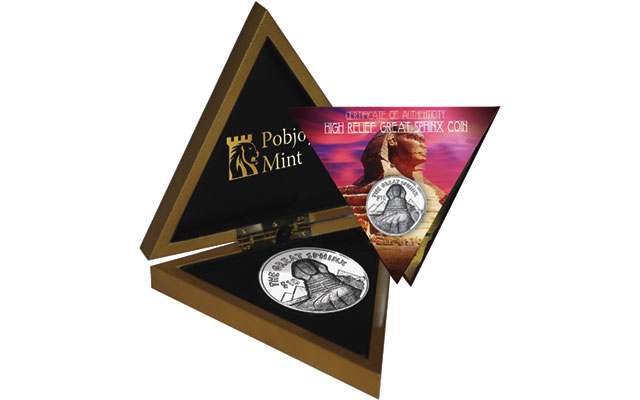 The Ultra High Relief silver $10 coin comes packaged in a triangular box to imitate the shape of the Great Sphinx pyramid.

The reverse of the 2015 coin shows a landmark miles away from either the issuer or the mint, the Great Sphinx of Giza in Egypt.

Built more than 4,500 years ago, the Great Sphinx is now one of the best-known symbols of Egypt, yet nobody knows its true meaning or what ancient secrets it might hold.  The limestone statue of a reclining sphinx, a mythical creature with a lion’s body and a human head, stands on the Giza Plateau on the west bank of the Nile in Giza, Egypt.

It is the largest monolith statue in the world, standing 20.22 meters (about 66 feet) high and 73.5 meters (241 feet) long. It is also the oldest known monumental sculpture, commonly believed to have been built by the ancient Egyptians during the reign of the Pharaoh Khafra (around 2558 to 2532 B.C.).

To indicate the Sphinx’s height, the ultra high relief coin features a three-dimensional image that rises above the coin’s surface, according to the Pobjoy Mint. The coin even shows the damage to the nose, believed to have been caused by a cannonball fired by Napoleon’s soldiers during the Napoleonic Wars.

The highest point on the coin is between four and five millimeters above the surface.

Each coin is presented in a triangular, gold-colored box reminiscent of the pyramids which surround the monument.