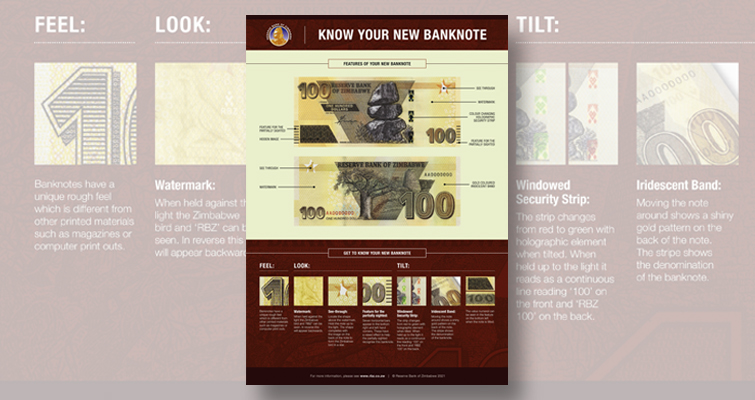 Zimbabwe is going to release a new $100 note and is trying to convince that the denomination will not be inflationary.

Images courtesy of the Reserve Bank of Zimbabwe.

Zimbabwe is going to great pains to reassure the public that a new $100 note soon to be released will not be inflationary. The Herald newspaper says that at about 68.5 U.S. cents, the denomination is the equivalent of a single urban bus fare. Currently, the $50 note is the highest denomination in use.

Inflationary fears are easily understood when it concerns to Zimbabwe, where the hyperinflation of 2008 and 2009 resulted in cost increases estimated at 79.6 billion percent per month and the now legendary 100 trillion (14 zeroes) dollar bank note.

Reserve Bank of Zimbabwe Governor Dr. John Mangudya tried to quell the fears by explaining, “Bank notes are essentially small change and hardly used any more for shopping where mobile and plastic money now dominate as Zimbabweans get out of the cash habit, but they are needed for things like bus fares and other small transactions. It’s not going to cause inflation because we are not printing any new money. Individuals and businesses can only access cash based only on what they have in their bank accounts.”

The new note will have the same 156 by 66 millimeters dimensions as the other Zimbabwean denominations. The date of issue has not been specified.

It will be brown in color and follow the standard face design on Zimbabwean currency of the Chiremba Balancing Rocks in Matopos National Park. The back shows the Great Zimbabwe national monument and a boabab tree. The monument is a UNESCO World Heritage Site that is the ruins of an African Iron Age city in the southeastern part of the country. The baobab tree is called the “tree of life” in Africa because of its ability to store large amounts of water during the dry season.

Security devices include one for visually impaired recognition, a latent image showing the denomination, a windowed security strip inscribed RBZ with a red to green color shift. The watermark has the highlighted inscription RBZ and a see-through window of the Zimbabwe bird facing left. The back has a gold iridescent band showing the denomination of the note and see-through window of the Zimbabwe bird looking right. 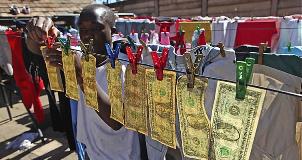 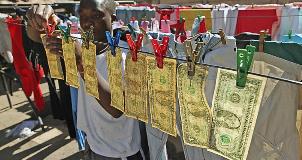 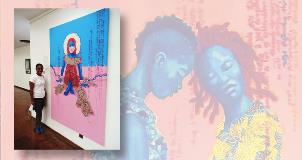