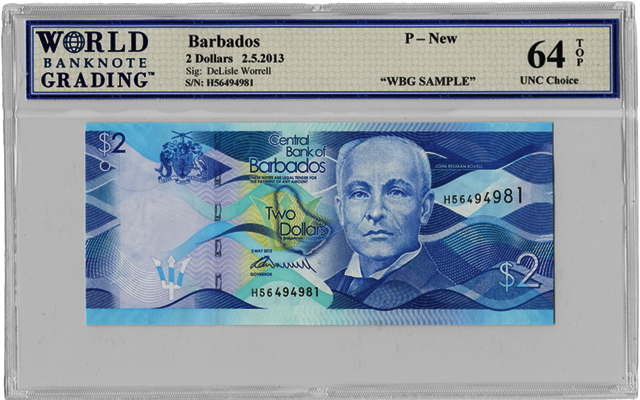 This $2 note issued by the Central Bank of Barbados features a TOP designation on the World Banknote Grading holder. It indicates totally original paper, meaning the note "is of remarkable and original quality for the grade."

The World Banknote Grading company was accepting submissions to its new grading service during the June 13 to 15 International Paper Money Show in Memphis, Tenn.

Dennis Lutz, founder and chief executive officer, and his son, Jason Lutz, operations and technology, launched the firm in late 2013.

The firm has a team of paper money grading specialists, with a combined experience of more than a half century.

The WBG encapsulation label provides the name of the note’s issuing country and the denomination, catalog number, and grade. Exact dates of issue for the note, if known, are added, along with the name of the printer and signature identification.