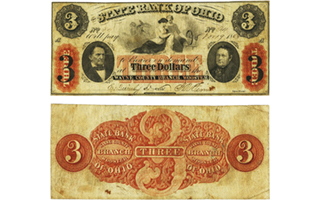 This 1863 $3 obsolete note, part of the Wendell Wolka Collection of Ohio obsolete notes, was issued by the State bank of Ohio, Wayne county Branch, in Wooster. 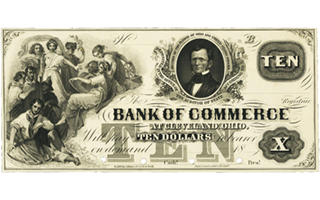 This $10 obsolete note proof was printed by the American Bank Note Co. for the Bank of Commerce at Cleveland. Four examples are presently known in private hands. 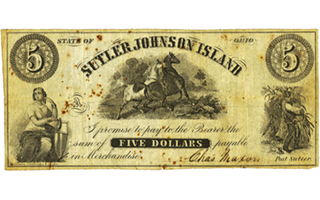 This $5 piece of sutler scrip, part of the Wolka Collection, was issued by Charles Maxon, the camp sutler on Johnson Island.

The Wendell Wolka Collection of Ohio obsolete notes will be offered by Heritage Auctions during its auction held in conjunction with the April 23 to 26 Central States Numismatic Society’s convention in Schaumburg, Ill.

A selection of 403 Ohio obsolete notes from Wolka’s collection will be offered during the April 23 session of the auction, which will be held at the Renaissance Schaumburg Convention Center.

Wolka, of Indiana, is a well-known writer, researcher, and speaker on the subject of paper money.

He has been collecting for more than 50 years and writes the monthly Coin World column “Collecting Paper.”

Wolka spent nearly a decade acquiring the Ohio obsolete notes, and drew from the collection when writing his 2004 book, A History of Nineteenth Century Ohio: Obsolete Bank Notes and Scrip.

The book is one of a series of books about obsolete bank notes and scrip published by the Society of Paper Money Collectors.

While the types of issuers varied, obsolete notes as a broad class are sometimes referred to as “broken bank notes” because many, though not all, of the issuing banks eventually failed or “went broke.”

Examples of the notes being offered include:

An 1863 $3 obsolete note (Lot 15393) issued by the State Bank of Ohio, Wayne County Branch, in Wooster. The face design displays a vignette of two maidens seated adjacent to a spinning wheel, with two angels in the background.

Very few of these State Bank of Ohio, Wayne County Branch, in Wooster notes were produced between 1861 and 1863, and most were destroyed before they could be issued because the branch, along with others, wound up affairs and became a national bank (federally chartered), according to the auction catalog. Only two issued examples on this branch are known, along with a face proof from the Wayne County Branch. The note is estimated to realize $1,000 to $1,500.

A $10 obsolete note proof (Lot 15265) printed by the American Bank Note Co. for the Bank of Commerce at Cleveland, displays a large vignette of four male and six female allegorical figures representing various trades and professions. In the center is a portrait of an unidentified man. Ornate engraving flourishes can be seen throughout.

The proof is mounted on card stock and has four punched cancellation holes along the bottom edge. PCGS Currency graded the note Choice New 63 Premium Paper Quality. The note is estimated to bring between $800 and $1,000.

A $5 piece of sutler scrip (Lot 15314) issued by Charles Maxon, the camp sutler on Johnson Island, is considered unique although reprints of a $1 denomination are known, according to the catalog. Johnson Island is located in Lake Erie about 3 miles from the city of Sandusky.

The island served as a prisoner of war camp to hold Confederate officers during the Civil War. This piece was graded by PCGS as Apparent Very Fine 25 due to some scattered rust spots, small edge splits and body holes. This item is estimated at $1,000 to $1,500.

Sutler scrip notes were privately issued money from traveling merchants, known as sutlers, who offered their wares to soldiers.

The Union Army contracted with sutlers to sell goods such as stationery, toothbrushes, and combs to soldiers and prisoners of war.

For more information about the auction, visit the Heritage website at www.ha.com or call the firm toll free at 877-437-4824.