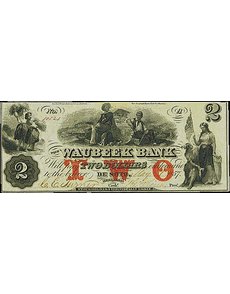 The badger standing on top of the shield that sits between the sailor and the miner on the face of this $2 obsolete note from the Waubeek Bank of De Soto, Nebraska Territory, along with the word FORWARD, is a fairly decent rendition of the Wisconsin state seal.

I am often reminded that even the most common obsolete bank notes have intriguing stories to tell, if only we would pay closer attention to them.

Take, for example, the $2 note on the Waubeek Bank of De Soto, Nebraska Territory. It is not particularly rare and can be found with just a tiny bit of persistence on dealer price lists, in auctions and even on eBay. In my hunts for obsolete notes, I have seen this note any number of times and have never given it a second thought.

Recently I happened to notice a peculiar detail on the central vignette: a badger is standing on top of the shield that sits between the sailor and the miner. I then noticed the motto FORWARD on the shield. Then it all clicked — the shield is a fairly decent rendition of the Wisconsin state seal.

The sailor and the miner with the pick seated by the shield are also part of the Wisconsin state seal. So, the entire center vignette is a close elaboration of the state seal.

What in the world did the Wisconsin state seal have to do with a bank in the wilds of the Nebraska Territory?

Well, the short answer is “Nothing!” My suspicion is that this was a stock vignette that appeared in the Rawdon, Wright, Hatch & Edson salesman’s vignette book. Typically the salesman would sit down with his prospective bank customer and go through the book, picking out vignettes that were deemed attractive.

It was cheaper for the banker to select vignettes that were “stock” since the engraving had already been done. If the banker wished his new notes to portray himself or family members, for example, the cost went up because a new engraving had to be made.

If the banker took a fancy to a stock vignette, the salesman’s job was simply to reinforce the notion that the customer had made a wonderful selection and book the order. So, even if the salesman knew that this was essentially a Wisconsin themed vignette, if the customer liked it, then it was a great choice.

After all, there was virtually no chance that anyone in Nebraska had the slightest clue what the state seal of Wisconsin looked like, so why worry about it?

The vignette was, in fact, used on at least one Wisconsin note: a $10 note on the Oconto County Bank of La Porte, which was in business from 1858 to 1861.