Who Dat? (not the Saints) 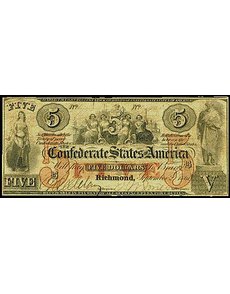 Colorful $5 Sept. 2, 1861, Richmond note was printed for the Confederate States of America by the Southern Bank Note Co., which was, actually, the New Orleans branch of the New York-based American Bank Note Co.

Shamelessly borrowing from the popular fight song of the New Orleans Saints football team, “Who Dat?” I would modestly suggest that the song could have been inspired over 150 years ago. If we “fast reverse” to 1861, we would find a nondescript listing for the American Bank Note Co. at 12 Royal St. in Gardner’s New Orleans Directory for 1861.

The listing, which probably predates the beginning of hostilities in April of that year, is one of the few pieces of evidence that an outpost of the prestigious American Bank Note Co. existed in New Orleans.

Both just before and just after the shooting war began, both American Bank Note Co. and National Bank Note Co. of New York were involved in producing bank notes and other fiscal instruments for the Confederate States of America.

The last shipment of Treasury notes was, in fact, made several days after Lincoln issued a proclamation of blockade on April 19, 1861. Federal authorities raided both companies in New York on April 25, 1861, and put a permanent end to the firms’ “southern business.”

However, there was still a faint pulse for American Bank Note Co. Its small three-man office in New Orleans headed by Samuel Schmidt, a longtime employee, offered its services to the Confederacy. Perhaps prompted by a letter from the New York office in early May, 1861, directing him to cease work on Confederate notes, Schmidt apparently decided to shield American Bank Note Co. from being seen as openly consorting with “the enemy.”

He accomplished this by dusting off an old name that the company owned, “Southern Bank Note Company” and using it to produce six different designs of Confederate Treasury notes before the fall of New Orleans in April, 1862.

Some latter day skeptics have wondered whether the letter from New York was merely intended to officially distance American Bank Note Co. from the continued production of Confederate notes by its cut-off branch; particularly since the branch entered into a contract to design and print Confederate notes within a matter of days after receiving the “cease and desist” letter from New York.

Interestingly, Schmidt remitted $17,000 to New York in 1862, claiming that this represented the branch’s profits for the years 1861 and 1862. Based on other correspondence, a significant percentage of this must have been from engraving and printing Confederate notes.