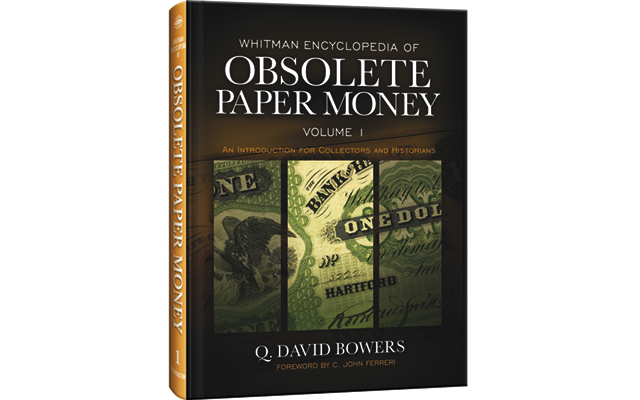 The first two volumes of the multivolume Whitman Encyclopedia of Obsolete Paper Money by Q. David Bowers will be available for purchase June 12 at the International Paper Money Show in Memphis, TN. The first volume is shown above.

The International Paper Money Show in Memphis, Tenn., will be the site for the release on June 12 of the first two volumes of a planned multivolume encyclopedia on obsolete paper money.

The first volume of the Whitman Encyclopedia of Obsolete Paper Money: An Introduction for Collectors and Historians by Q. David Bowers is a 288-page overview of the hobby and a focused discussion of the topic.

The second volume is a 752-page reference discussing obsolete notes issued by banks in Connecticut, Maine, and New Hampshire. This second reference is the first of what Whitman said will be three volumes on New England states.

The books will be available for $39.95 each after June 12 from www.whitman.com, and from booksellers and hobby shops nationwide and online.

The books can also be borrowed for free as a benefit of membership in the American Numismatic Association through the Dwight N. Manley Numismatic Library. Visit the ANA’s website, www.money.org, for more information about borrowing books.

Bowers “gives the history of every state, every town and city, and every bank that issued this uniquely American currency,” according to Whitman in discussing Volume 1. Thousands of these notes are printed in full color along with information on grading, rarity, and values; significant auction results; and advice for collectors, historians, and researchers alike.