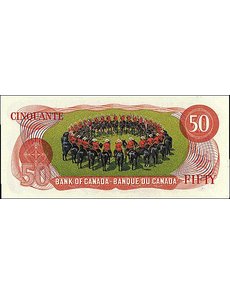 The Royal Canadian Mounted Police “Musical Ride,” performing the Dome formation, is depicted on the back of Series 1975 $50 Bank of Canada notes.

One of my small “sidelight” collections comprises modern Bank of Canada issues.

I have always been attracted to the bright colors and creative designs that seem to be embraced by our neighbors to the North.

One of my favorites is the $50 note issued nearly 40 years ago that features one of the most distinctive designs in all of world paper money — The RCMP Musical Ride.

Well the first part is perhaps a bit easier to explain and is better known than the second. The RCMP is the Royal Canadian Mounted Police.

The RCMP is the national police service of Canada and an agency of the Ministry of Public Safety Canada with more than 28,000 personnel.

It was created in 1873 to maintain law and order in the country’s western territories.

In 1919, the RCMP was merged with the Dominion Police and gradually expanded until it reached its present scope of operations, maintaining jurisdiction in eight provinces and three territories.

Now for the “Musical Ride,” part of which is depicted on the note mentioned.

As the organization’s name suggests, horses have been a part of the RCMP since its beginnings.

The Musical Ride was created by early members of the RCMP as a means of displaying their riding ability and as a way to entertain both themselves and the community in general.

Some sources suggest that the first Musical Ride was performed in 1876 but, officially, the date of the first performance is acknowledged as being 1887 in Regina. The first public performance, featuring 20 officers on horseback, was in 1901.

The RCMP website notes that, today, “the Musical Ride is performed by a full troop of 32 riders and horses, plus the member in charge. The Musical Ride consists of the execution of a variety of intricate figures and cavalry drill choreographed to music.

“Demanding utmost control, timing and coordination, these movements are formed by individual horses and riders, in two’s, four’s and eight’s at the trot and at the canter.”

The website’s description identifies one of the more familiar Musical Ride formations as “the ‘Dome,’ once featured on the back of the Canadian fifty-dollar bill.”

The Musical Ride visits approximately 40 venues annually during a 100-day tour, according to the website.

In an effort to be sure all Canadians have an opportunity to see this RCMP event, the Musical Ride visits each province on a four-year rotational basis.

The Musical Ride is also is open to performing in the U.S., China, England and Australia, according to the website.

In 2014 the Musical Ride is scheduled to tour the provinces of Quebec and Alberta.