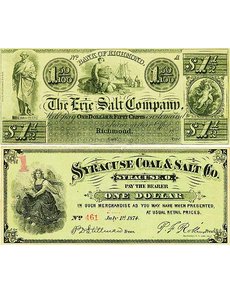 During the 19th century a large number of enterprises issued paper money as well as scrip. Some are quite familiar, including banks, railroads, state and local governments, canal companies, and even the proverbial “butcher, baker and candlestick maker.”

In addition, a number of natural resource companies involved in coal, iron and copper mining issued notes, often as part of a system where scrip was paid to employees who then were able to purchase life’s necessities with it at a company store. The scrip was often good only at the company store. The temptation to charge high prices at these captive market outlets was always present.

One of the rarer categories of natural resource companies was that composed of companies mining salt. Salt is a basic element in our diet and serves as a food preservative. It even keeps us (for the most part) on the road during those winter ice storms. Thanks to substantial demand and significant available supplies, salt mining is still relatively widespread in the Midwest.

I am aware of two companies in Ohio that have a stated connection to salt: the Erie Salt Co. of Richmond, and the Syracuse Coal & Salt Co. of Syracuse.

The first mention of the Erie Salt Co. was in the spring of 1836 when it was listed in a newspaper story as having been chartered by the state legislature during the previous session. There is no further mention of the company, its bank or its fate — another of the mysteries that seem to inhabit obsolete paper money. Most notes of this company seen to date are only partially issued or are unissued remainders, and my suspicion is that the enterprise may have never been in operation.

The Syracuse Coal & Salt Co. of Syracuse, Ohio, is first mentioned in the Annual Report of the State Inspector of Mines for Ohio in 1874. A passing reference in an 1897 Meigs County newspaper suggests that the company could have been in operation as early as the late 1850s. The notes themselves are dated 1874.

The area around Syracuse was noted for both its coal and salt resources and this company apparently had interests in both areas. The note was clearly intended to be used at the company store as it was payable to the bearer “in such merchandise as you may have when presented at usual retail prices.”