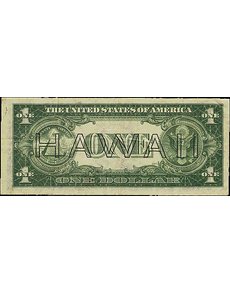 This Series 1935A $1 silver certificate has HAWAII overprinted on it — twice on the face and once across the back. These notes, issued in 1942, could be quickly identified and devalued if enemy forces invaded the islands. 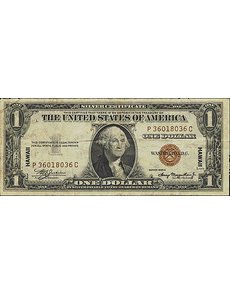 This Series 1935A $1 silver certificate has HAWAII overprinted on it — twice on the face and once across the back. These notes, issued in 1942, could be quickly identified and devalued if enemy forces invaded the islands.

A friend has a $1 silver certificate with the word HAWAII printed twice on the face and once across the back.

Is this something special?

Your friend has a Series 1935A $1 silver certificate.

This is an emergency note issued by the United States during World War II. It looks exactly like any other $1 silver certificate except for two things.

One, it has the word HAWAII overprinted twice on the face and once across the back of the note.

After the Dec. 7, 1941, Japanese attack on Pearl Harbor in Hawaii, Treasury Department officials decided that if enemy armed forces successfully occupied the Hawaiian Islands, any paper currency in circulation needed to be distinctly identified.

If that happened, the U.S. government could revoke the legal tender status of those notes. The notes would become useless as currency, preventing the Japanese, German or Italian armed forces from using captured notes in any financial warfare.

The overprinted notes were released into circulation in July 1942, and only these notes were acceptable in the islands after Aug. 15, 1942.

At first, regulations prohibited the notes from circulating outside Hawaii, but all restrictions on using the currency outside the islands were lifted in 1944. The notes often turned up in circulation on the mainland after the war and were distinctive enough for many people to pull them out of circulation as keepsakes.

These notes are highly collectible. Your friend’s note appears to be in Fine to Very Fine condition, worth $45 to $50, according to Coin World’s Paper Money Values.

Ultimately the value (above face value) of any collectible coin or note is what a buyer and seller can agree upon.

In addition, the BEP printed $1, $5 and $10 silver certificates with gold Treasury seals. These notes were issued to U.S. forces serving in Europe and North Africa.

Like the HAWAII-overprinted notes, these notes could be identified and declared worthless if they fell into the hands of an enemy.