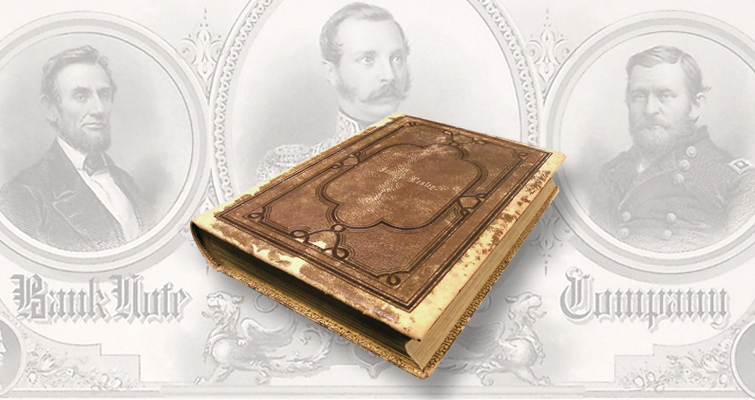 An 1870s era book of vignettes for the American Bank Note Company sold for $3,450 in a World Banknote Auctions offering.

Although it was not the most expensive example of paper money-related material at the American Numismatic Association World’s Fair of Money in Rosemont, Illinois, an 1870s era American Bank Note Company presentation book with 74 vignettes was the most uniquely interesting, even though its result at auction fell well below estimates.

The book was part of World Banknote Auctions’ Sale 30 on Aug. 25. It brought a hammer bid of $3,450 on an estimate of $8,000 to $12,000. It was presented to Joseph Lesley, whose name is gilt-embossed on the front cover. There is no information on Lesley, although the New York Times archives show someone by that name served as secretary of the Pennsylvania Railroad Company until March 24, 1881, when he was replaced because of illness.

Since books such as this were often presented by salesmen of the American Bank Note Company to prospective customers as an example of what the company could produce, it is plausible that this was presented as part of an effort to secure a contract to print stock certificates, which are known to have been printed by the company in Philadelphia for the railroad during that era.

Most of the 74 plates are of individual vignettes on single pages.

One individual print WBNA says is worth mentioning is a full-size intaglio print with the portrait of Czar Alexander II of Russia flanked by U.S. Presidents Lincoln and Grant. This rare print appears to have been produced in very limited numbers and helps date the volume. It may have something to do with speculation that the czar helped the Union during the Civil War by sending ships into American waters. Alexander II is best known for emancipating the serfs in Russia in 1861. He also was the one who sold Alaska to the United States in 1867. He was assassinated in 1881.

The vignettes are in no particular order and cover a wide range of topics, including allegories, natural scenes, and historical figures, many of which are also found on currency printed by the company. World Banknote Auctions has created a page on its website, https://www.worldbanknoteauctions.com/abnc_presentation_book/ where all the book’s pages are illustrated, giving a look at the entire book and all the vignettes. Additionally many bank notes on which these vignettes appear have been identified, highlighting the diversity of the book, often with many different issuers and locales for the same vignette.

It is not well known for instance, that the statue of Freedom by Thomas Crawford on top of the U.S. Capitol and that is depicted on the $5 demand note of 1861 and on the first $5 legal tender notes is also on an Argentinian Banco Provincial De Cordoba 10-peso note, a $5 note of the Harrisburg Bank in Pennsylvania, and two notes from Uruguay.

Another vignette, of Justice, was used on at least seven disparate notes — from Canada, Chile, Ecuador, Mexico, and on four issues of Colombia from 1882 to 1907. 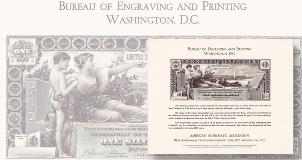 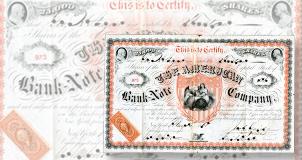 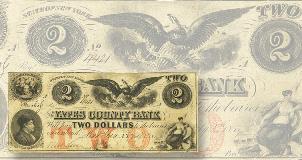