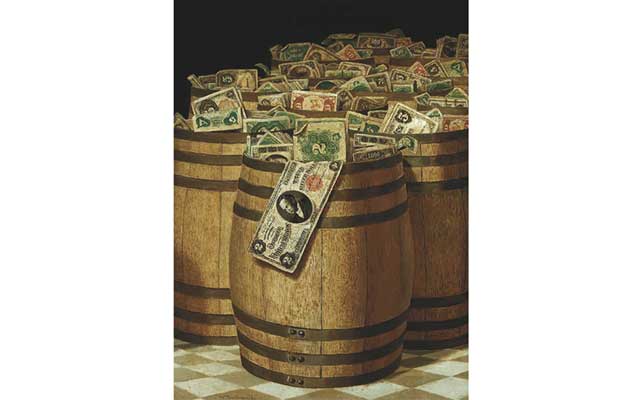 A quintessential work by the artist is this painting depicting barrels of money that sold for $87,500 at an Oct. 16, 2013, Doyle’s auction. 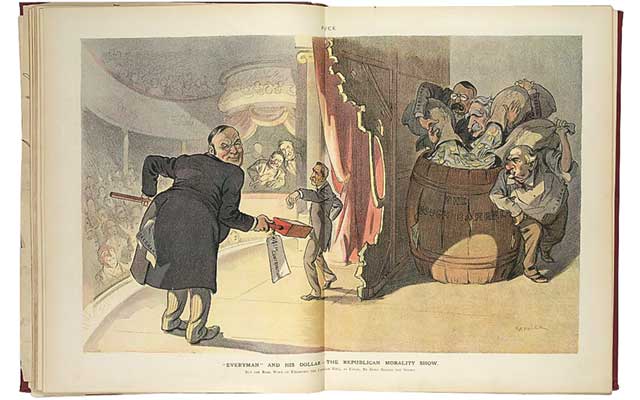 The concept of money in a barrel was one that was politicized in the late 19th and early 20th century. This 1906 cartoon titled “‘Everyman’ and his Dollar — The Republican Morality Show” depicts a Republican fundraiser where J. Pierpont Morgan, Henry H. Rogers, and Edward H. Harriman pour coins from large money bags into “The Dough Barrel.”

This is the second post in a series on French artist Victor Dubreuil and his work involving paper money.

Because artist Victor Dubreuil did not have access to large denomination bills, much of the bills used in his paintings are small-denomination notes, with $1 and $5 notes showing up most often in his pictures.

He would paint bills by themselves, such as a small painting in The Phillips Collection in Washington, D.C., depicting the face of a Series 1891 $5 silver certificate. The same note type appears in a painting given the title The Eye of the Artist at the Butler Institute of American Art in Youngstown, Ohio, where in that painting the note is painted as if it is peeling off the canvas. That painting has a single eye peering through a “hole” in the canvas, with a stamped and addressed envelope to the artist.

Titles used for the artist’s works have been assigned by dealers, auctioneers, and museums, as the artist did not generally provide titles for his own works.

In a 2012 article titled “Toward Understanding Victor Dubreuil” in the publication American Art, Dorinda Evans suggests that the choice of the specific bill depicting Ulysses S. Grant may have had significance for the artist. For example, Grant died in 1885 in New York and the artist may have seen him lying in state at City Hall.

Also, Grant found himself the victim of a bankruptcy scandal in 1884, so Dubreuil may have found in Grant a sympathetic character. Yet Evans also notes that the artist often included copied photographs in pictures, and warns that any conjecture as to making an autobiographical reading of his paintings is more guesswork than fact due to the limited substantiated biographical information on the artist.

Some of his depictions of large-denomination notes are based more on imagination than reality. For example, in some works he shows George and Martha Washington on $10,000 notes that are the work of pure imagination and his extrapolating from lower denominations.

Perhaps the artist is best known today for his paintings of barrels of money. These have several recurring elements: there are typically multiple barrels, and at least one bank note is always folded over the rim in an obvious manner that highlights the portrait on the note. As Evans notes, among the visible portraits in each painting is always a noted American patriot.

Much of the artist’s popularity today is due to his colorful biography, and the sheer wealth depicted in his paintings. He was one of several still life painters on the East Coast at the end of the 19th century with expertise in depicting contemporary money, including William Michael Harnett and John Haberle. Both of these artists were under the watchful eye of the government as their works veered close to counterfeiting according to the letter of the law, although like Dubreuil, they were undeterred and continued to make painting contemporary bank notes a specialty.

As Evans points out, when compared with his peers, Dubreuil’s output was less prolific than other painters who specialized in the genre, and the quality of his works was uneven, with his bank notes often being loosely painted.

But, many have observed that he had an individuality that his peers lacked, and his leftist politics lend weight to many of his works, with warnings addressed to capitalists, that go beyond what his contemporaries were doing.

Ultimately, Dubreuil likely returned to France around 1899 or 1900 as he was under suspicion of counterfeiting. One of his prized barrel paintings was confiscated from a Boston shop window and presumably decorated the office of the head of the Secret Service, Chief Wilkie, in Washington D.C.

Internal reports at the Secret Service observe that the paintings were made for sale to saloons and clubs, without an intention to counterfeit, but as Evans notes, Dubreuil’s past made the possibility of arrest all the greater and he could not stay in New York.