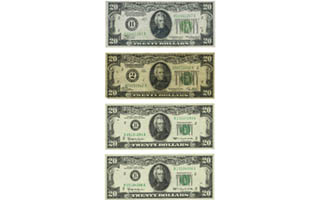 U.S. and world paper money, coins and stamps will be offered at auction April 8, 2014, by Doyle New York auctions in New York City.

Out of the 216 lots, two offer a large quantity of notes and U.S. commemorative coins, for what the firm calls “instant” collections.

Lot viewing by appointment will be held April 4 to 7 at the firm’s offices located at 175 E. 87th St., New York City.

For more information about the auction or to make a lot viewing appointment, call the firm at 212-427-4141 or send an email to coins@DoyleNewYork.com. Lots can also be viewed on the firm’s website at www.doylenewyork.com.