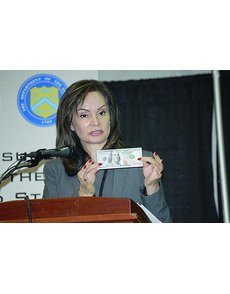 U.S. Treasurer Rosie Rios, pictured here in 2009, spoke about the Women on 20s movement during a public appearance this week.

According to Fortune, Rios say she and Treasury Secretary Jack Lew, are "engaging in a collaborative process to move the discussion forward.”

This is a significant step in an online campaign that's geared towards breaking the gender barrier on American paper money.

Keep reading about the Women on 20s movement

The American firm launched the gold-plated crown coin to honor the 800th anniversary of the sealing of the Magna Carta. The historic English document is widely know as a symbol of freedom and a treasured part of America and Great Britain's heritage.

Pobjoy Mint has released four new coins on behalf on behalf of the Isle of Man government.

4. March of Dimes Silver Set is just around the corner

Orders for the highly anticipated set will start being accepted May 4.

Kitco.com listed the following prices per ounce as of 9:22 a.m. Friday: