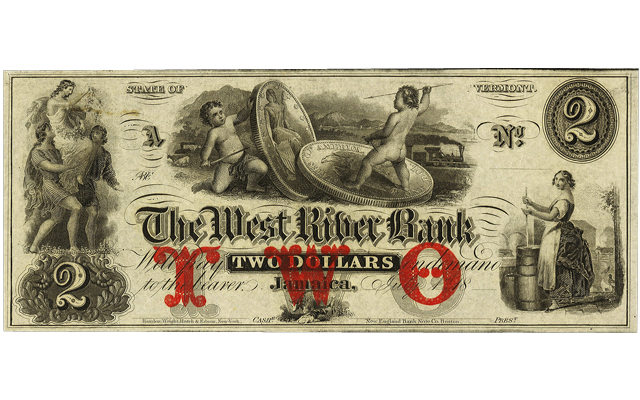 Some of the best known examples of paper money designs featuring coins were issued by the West River Bank in Jamaica, Vermont. Many of the notes, like this one, feature cherubs cavorting along Seated Liberty silver dollars. 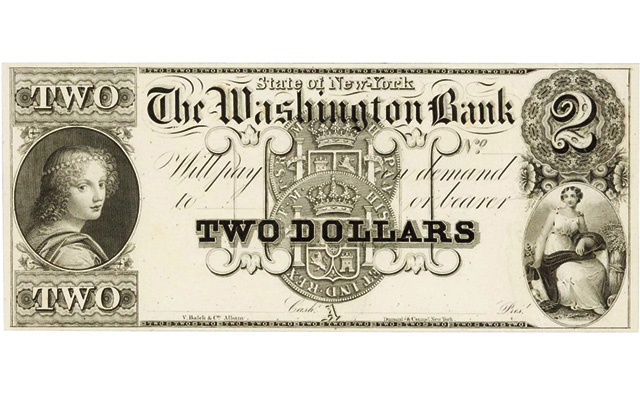 Two images of the reverse design of a Spanish dollar, or 8-real coin, appear in the center of this $2 note proof for the Washington Bank (New York City).

Editor's note: The following is the second of a three-part Coin World series about collecting paper money featuring coin designs found on paper money, prepared by Michele Orzano for the January 2015 monthly edition of Coin World.

There are two other types of federally-produced U.S. paper money that feature coins in their designs.

As the population of California increased, the use of gold coins for daily transactions also increased.

“The counting and handling of so much coin was burdensome and time consuming and was a barrier to the efficient operation of the banks,” according to Paper Money of the United States by Arthur L. and Ira S. Friedberg.

Finally Congress approved the Act of July 12, 1870, to authorize 10 banks to issue and circulate paper notes redeemable in gold coin. All the banks but one were located in California, The Kidder National Bank of Boston. The Boston bank had $120,000 in notes prepared, but never issued any of them, according to the fifth edition of The Comprehensive Catalog of U.S. Paper Money by Gene Hessler.

For all banks, fewer than 300 pieces survive in all denominations. Most are in a lower state of preservation.

The vignette was engraved by James Smillie, while he was with the American Bank Note Co.

Beyond the notes stating that payment would be in gold coin, each note was printed on yellow-tinted paper, possibly giving a hint to the type of payment.

The face designs were the same as those used for the national bank notes of the First Charter Period except for where the demand notice indicates the notes were redeemable in gold coins.

The government issued nearly two dozen issues of interest-bearing Treasury notes. These are considered to be the rarest of all currency types. The denominations of the notes range from $3 to $1,000.

The $50 6 percent interest-bearing Treasury notes have a very interesting look to them.

According to The Engraver’s Line by Hessler, the engraving-printing firm of Rawdon, Wright, Hatch and Edson prepared this uniface note, which is loaded with interesting and significant vignettes.

One of the vignettes depicts Mercury, the Roman messenger god, who holds in his right hand a caduceus and in his left, a cornucopia that appears to be filled with coins.

Mercury was the protector of roads, travelers, thieves, merchants and their merchandise and vagabonds.

In the vignette called Wealth, a woman is seated next to a cornucopia filled with coins. In her right hand she holds what may be a key and her left hand is extended toward Mercury.

A griffin, a Greek mythical beast with the head and wings of an eagle and the body of a lion, sits to the right of Wealth, carefully watching the scene.

The engraver, George Whitefield Hatch, knew his mythology when he cast the griffin in the role of observer. The griffin guarded the gold of ancient Scythia, a country northeast of Greece. The Wealth vignette was designed and engraved by Freeman Rawdon.

The gold national bank notes and the interest-bearing Treasury notes are very rare.

However, the Series 1886 $5 silver certificates are more accessible to collectors. The example illustrated with this story sold at auction for $2,115 in the Heritage Long Beach Expo Currency Signature auction Sept. 5, 2014. It was graded by PCGS Currency as Apparent Very Fine 30.