Polish note upgrade to be completed with 200-zloty in February 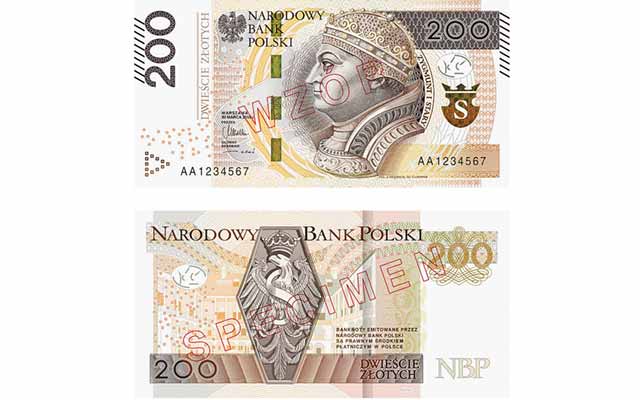 Officials of Narodowy Bank Polski, the National Bank of Poland, said June 23 that a 200-zloty note with upgraded security features will be introduced into circulation in February 2016.

Officials of Narodowy Bank Polski, the National Bank of Poland, said June 23 that a 200-zloty note with upgraded security features will be introduced into circulation in February 2016. This release will complete the modernization of the currency system begun in 2014 when the 10-, 20-, 50-, and 100-zloty notes were updated.

The new notes are still part of the “Sovereigns of Poland” series inaugurated in 1994, and keep the same basic designs, but these newer issues are characterized by more advanced security features.

As the 200-zloty note, bearing the bust of King Sigismund I (1506 to 1548), is currently Poland’s highest denomination, its security devices are the most advanced. An information brochure made available by the bank mentions these: watermarks; a thread that changes color from green to gold as the note is moved; a triangle composed of small circles enabling tactile recognition, and some lines at the edge that do the same; a shield with a checkerboard pattern that also changes from green to gold with movement; and an optically variable decorative gold pattern on the back along with a gold colored indication of the denomination within a geometric pattern. Unmentioned by the bank but noticeable on both sides are the circles of the Eurion Constellation.

Bank officials also revealed that the 200-zloty note soon will not be the highest-denomination issue; the bank is beginning work on a 500-zloty note with a portrait of King Jan III Sobieski, which will go into circulation early in 2017.