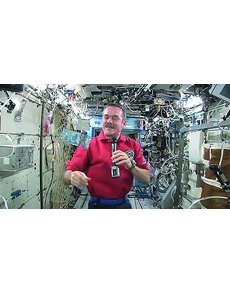 Canadian astronaut Chris Hadfield sends the new Canadian $5 note spinning across the weightless module during the live webcast aboard the International Space Station.

Image from Bank of Canada webcast. 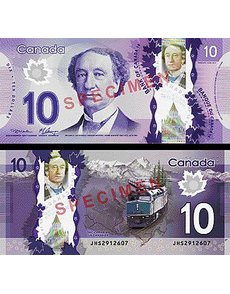 The face of the new $10 denomination features a portrait of former prime minister Sir John A. Macdonald. The back of the new design shows a vignette of The Canadian train traveling through the Rocky Mountains. 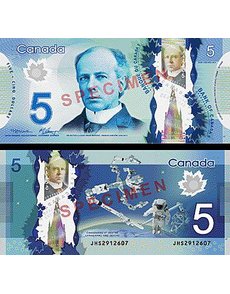 The face of the new $5 notes will show a portrait of Wilfrid Laurier. The back design focuses on two pieces of Canadian technology that helped build the International Space Station: Canadarm2, a mobile robotic arm, and the two-armed Dextre.

Canada’s new $5 polymer note is proof that the sky is not the limit.

The Canadian $5 note was unveiled April 30 by Canadian astronaut Chris Hadfield aboard the International Space Station.

ISS Commander Hadfield was the “surprise guest” via webcast at the news conference at the Bank of Canada’s main offices in Ottawa to unveil the new designs for the $5 and $10 denominations.

Both the new $5 and $10 notes will begin circulating in November. The $5 note’s design has a space theme, depicting Canadian contributions to space exploration.

Hadfield welcomed the audience to the space station during the live webcast transmission via a link through NASA’s Mission Control in Houston.

Hadfield plucked the new $5 note off the wall of the station module where he was broadcasting and set it spinning in the microgravity on the station.

Though Hadfield had not listed the note in his official flying kit posted on www.asc-csa.gc.ca/, the Canadian Space Agency’s website, the note secretly traveled with Hadfield aboard the Soyuz spacecraft when it left Earth Dec. 19, 2012, for its journey to the ISS.

Hadfield was clearly delighted to talk about the pride he has in Canadian achievements in space flight and robotics as displayed on the $5 note. As he gestured with both hands, his microphone gently floated in front of him.

“These bills will remind Canadians, every time they buy a sandwich and a coffee and a donut, what we are capable of achieving,” said Hadfield, who is in command of Expedition 35 on the space station until his scheduled return to Earth May 13.

“I try to inspire young Canadians to aim high. This new $5 bill should do the same,” Hadfield said. “By giving prominence to Canadian achievements in space, this bank note reminds us that not even the sky is the limit.”

Hadfield is an avid user of social media — he has a Twitter account, Facebook page, and posts his photographs from space on Tumblr. He has posted videos of himself demonstrating everyday things in a microgravity environment, such what happens when one cries or wrings out a wet washcloth in space.

His unveiling of the new $5 design is posted on the Canadian Space Agency’s website page at www.asc-csa.gc.ca/eng/Default.asp and the agency’s YouTube channel, www.youtube.com/user/canadianspaceagency.

The face of the new $5 notes will continue to feature a portrait of Wilfrid Laurier, prime minister of Canada from 1896 to 1911.

Robotics are the focus of the new designs on the back of the $5 note. The design features two pieces of Canadian technology that helped build the station module by module: Canadarm2, a mobile robotic arm, and the two-armed Dextre, which helps move heavy objects, reducing the need for astronauts to make space walks.

Both robotic devices are attached to the Mobile Base, a moveable work platform and storage facility on the outside of the space station.

The note also depicts an unidentified astronaut during a space walk. The figure is representative of all Canadians’ contributions to the space program and research on the ISS, according to the bank.

Hadfield is no stranger to space-themed money. In 2006, the Royal Canadian Mint released two coins featuring his portrait and Canadarm2.

Also unveiled during the press conference, but this time on Earth, were designs for the $10 note.

VIA Rail Canada’s Paul G. Smith unveiled the new $10 designs, which feature a vignette of The Canadian train traveling through the Rocky Mountains, representing the transcontinental linking of Canada’s east and west coasts by rail.

A portrait of Sir John A. Macdonald, who was prime minister of Canada at the time of the railway completion, will still be used on the face of the $10 note.

? A metallic portrait of the Canadian official depicted on the face can also be seen on the back.

For more information about the new $5 and $10 designs, visit the Bank of Canada website at www.bankofcanada.ca/ and click on the Banknotes button on the drop down menu at the top of the homepage. ¦