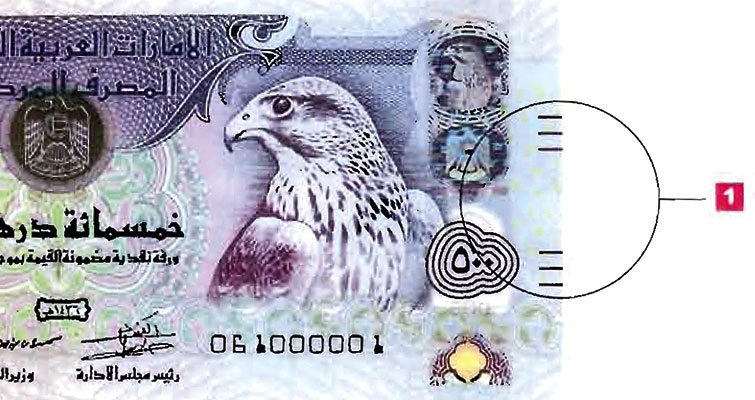 New notes of the United Arab Emirates are designed to benefit the visually impaired.

The Central Bank of the United Arab Emirates said in a notice to banks and money changers on July 8 that it was putting 500- and 5-dirham notes into circulation with revised fronts that include tactile features for the blind and visually impaired. The overall design and other specifications of the two notes are the same as on the notes currently in circulation, but with the new devices engraved at their edges.

On the 500-dirham note, the marking consists of four sets of three horizontal lines, two sets each on the left and right edges of the note. The 5 dirham note has a horizontal line in the middle at the right and left sides.

The new notes were put in circulation as legal tender on July 8. They will circulate concurrently with notes already in circulation.

At a trade fair news conference in Zambia on July 5, it was announced that since the nation had a new currency reprint contract covering the years 2015 to 2017, the Bank of Zambia took the opportunity to add tactile features to all the different bank note denominations of the Zambian kwacha.

The notes are scheduled to be released into circulation in the final quarter of 2015.

Another governor of the bank, Denny Kalyalya, had a different idea entirely as he urged Zambians to move away from cash transactions and toward electronic payments. Kalyalya said: “We want to encourage you to move away from cash and move into point of sale. This is non-currency form of payment. That is the direction everybody is moving towards.”