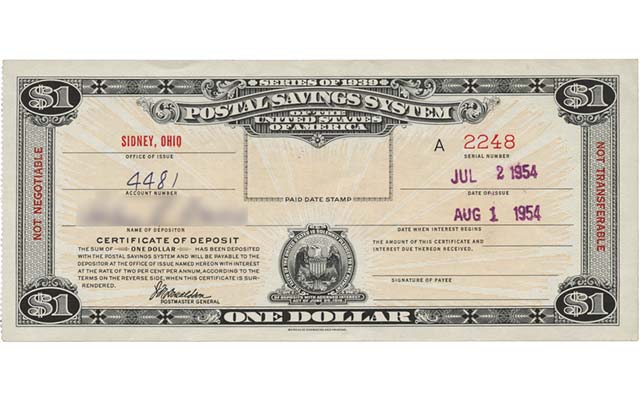 A reader recently asked about Postal Savings System certificates. He correctly observed that the look of the certificates might appeal to paper money collectors.

The certificates were first issued in 1911, a year after Congress established the Postal Savings System in designated Post Offices.

“The legislation aimed to get money out of hiding, attract the savings of immigrants accustomed to saving at Post Offices in their native countries, provide safe depositors for people who had lost confidence in banks, and furnish more convenient depositors for working people. Although bankers first viewed the Postal Savings System as competition, they later were convinced that the PSS brought a considerable amount of money out of hiding from mattresses and cookie jars,” according to www.usps.com.

Certificates like the one illustrating this article were issued to depositors as proof of their deposit in the system. According to the USPS: “Deposits were slow at first, but by 1929, $153 million was on deposit. Savings spurted to $1.2 billion during the 1930s and jumped again during World War II, peaking in 1947 at almost $3.4 billion, with more than four million depositors using 8,141 postal units.”

After World War II, banks raised their interest rates to 2 percent or higher “and offered the same government guarantee” as the Postal Savings System and savings bonds provided a “higher rate of interest.” Deposits in the system plummeted, dropping to $416 million by 1964.

The Postal Savings System officially ended on July 1, 1967. Accounts were closed in September 1968. No claims on postal savings certificates made after July 13, 1985, were honored.

The certificates are very affordable. Dozens of examples have sold at Heritage Auctions, at prices that are no more than $632 for a single certificate, with many of the completed sales at prices less than $100.