Two brothers issued their own notes in the 1800s in Indiana 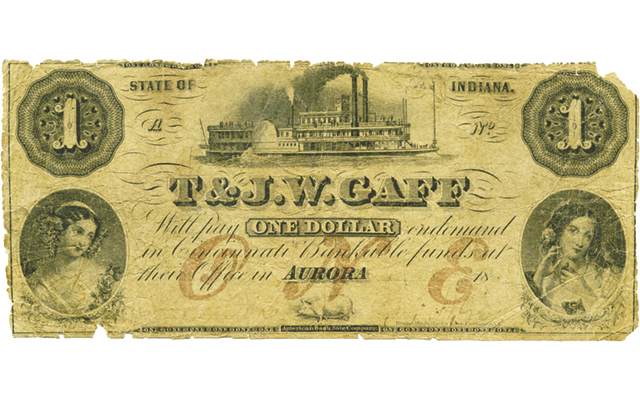 This $1 obsolete note issued by T. & J.W. Gaff of Aurora, IN, appropriately shows a steamboat as its central vignette. The Gaff brothers were majority owners of the steamboat Forest Queen, which participated in the Civil War. The brothers were involved in many businesses and Thomas Gaff's profits were used to build a mansion along the Ohio River in Aurora. The mansion, named Hillforest, is a National Historic Landmark and is open for tours.

As some of you may know, I am in the process of selling in various Heritage Auctions sales my reference collection of Ohio obsolete notes.

Being a hopelessly addicted collector, as soon as Ohio began “receding from sight in my rear view mirror,” the first thought was what the next challenge would be.

I presently live in Indiana, have written a state catalog on the state’s obsolete notes in 1978, and am finishing a long overdue update of same.

So, from a collecting perspective, it looks like it’s “Back home again, in Indiana” for my obsolete paper money collecting efforts.

In reviewing the manuscript for the new catalog, I happened upon a rather attractive note issued by T. & J.W. Gaff of Aurora, Ind.

The issuer didn’t ring any bells with me originally and didn’t show up in any of the state records that normally provide a fair amount of information on the state’s Free Banks and State Bank branches.

Thanks to the marvels of the Internet, this knowledge vacuum was soon filled.

Thomas and James W. Gaff were brothers who moved their distillery business from Philadelphia to Aurora in 1843.

They were also engaged in a wide variety of other businesses including a foundry and machine works, Nevada silver mining, merchandising, turnpike and canal building, steamboat operation, farming, and banking.

James moved to Cincinnati before the Civil War, but maintained his business connections with his brother.

During the Civil War, Thomas supplied both steamboats and supplies to the Union war effort.

The brothers were the majority owners of the steamboat Forest Queen, which participated in the Vicksburg campaign and served as Sherman’s headquarters during the siege of that city.

It is fitting that the central vignette on the $1 note shown above is of a period steamboat.

Although the bank note is extremely rare, a very tangible reminder of Thomas Gaff’s impact on the Ohio River city of Aurora survives.

Gaff had a mansion built and he called it Hillforest. It was completed in 1855 on a bluff overlooking the Ohio River.

It is a National Historic Landmark and is open for tours.