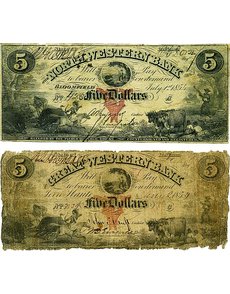 As you can see from the illustrations, these two obsolete Indiana notes — one from Northwestern Bank of Bloomfield and the other from the Great Western Bank of Terre Haute — were obviously printed from the same master plate.

The Indiana Legislature met in 1852, intent on replacing the State Bank of Indiana, which had maintained a virtual banking monopoly in the state for nearly twenty years, with so-called Free Banks that would be privately owned and founded by anyone who had the means to open such an institution.

The Free Banks issued notes that were secured by state bonds that were deposited with the state auditor who provided oversight to the banks. Circulation could be issued on a dollar-for-dollar basis against these bonds. Specie, equal to 12 percent of the circulation, was to be kept on hand.

Bonds purchased at perhaps 75 cents on the dollar could serve as backing for $1 worth of notes.

The bankers collected the interest on their bonds that were deposited with the state auditor. The circulation was loaned out at interest.

With a break in the financial markets in 1854 resulting from the Crimean War, the demand for coin went up and banks were faced with redemption demands for which they were ill suited. As a result a large number of Free Banks in Indiana failed as specie calls and the collapse in the prices of the underlying bonds took their toll.

During this time period the state auditor (the state official responsible for oversight of the Free Banks) reused the printing plates of failed or closed banks by having the engravers modify them.

The auditor’s 1857 plate register, for example, reports that the plate for the Traders Bank of Terre Haute was changed to Indianapolis and then again to Nashville, with the last plate residing in the auditor’s office. But other times, for some reason, a plate wasn’t redone.

The Northwestern Bank of Bloomfield and the Great Western Bank of Terre Haute were both founded in 1854 and perished the following year. The illustrated notes were obviously printed from the same master plate, but apparently a new plate was produced for one of the two banks, because the auditor’s plate register reports that the 5-5-5-10 plate for the Terre Haute bank was in his office while the Bloomfield bank’s 5-5-5-10 plate was in the engraver’s office on the East Coast. The mystery is “Why?”

Wendell Wolka has been a paper money collector and educator for more than 40 years. If you have questions or suggestions, you can reach him by e-mail at purduenut@aol.com, or by mail at Box 1211, Greenwood, IN 46142. Send a self-addressed, stamped envelope if a written response is required.