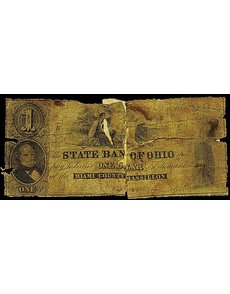 Older repairs to paper money are far less sophisticated than repairs are today. The use of inferior materials, like adhesive tape, and sloppy workmanship are often clearly evident. Just take a look at the note shown here. This “Frankenstein-esch” example combines halves from two different notes issued by banks in two different counties in Ohio.

Modern repairs can often be masterpieces that are virtually impossible to detect. Regrettably, sometimes those repairs lead to deception; kind of like forgetting to tell the buyer of your slick 1968 car that you turned the odometer back to zero a few years ago.

Back when nonfederal paper money wasn’t worth a whole lot, “conservators” used to cannibalize vignettes and other elements from more common notes that were only used for parts; extracting replacement portraits, borders, counters and the like.

If the replacements weren’t quite right, well, it was the thought that counted, right? The purpose of a repair was often simply to keep a note from disintegrating and allow it to remain in circulation a bit longer. Notes from “good” banks were patched with various materials, sometimes literally sewn together with needle and thread. Seldom was any deception associated with repairs from this period. Sometimes the outcome is even amusing.

Take, for example, the case of the note shown above. Early issues of the branches of the State Bank of Ohio had the issuing branch’s name written in. As a note wore in circulation, it often became almost impossible to tie back to the issuing branch, because the handwritten information faded (or it was indecipherable to begin with).

In 1851, the bank solved this problem by requiring the new designs to have the branch names and locations printed on both the face and back of each note.

In this case, the would-be conservator had two half notes that he joined together, none too carefully, with a paper strap and some glue.

The resulting note seemed to be an issue of the “Miami County branch of Massillon.” The only thing is, there was no such bank branch.

The repairman joined the left half of a $1 note from the Miami County branch of Troy, Ohio, with the right half of the same design from the Union County branch of Massillon, Ohio. As a result, I usually say that the note is either from “Troyillon” or “Massiroy.”

I’ve always wondered what would have happened if this note had been presented for redemption at either of those two branches.