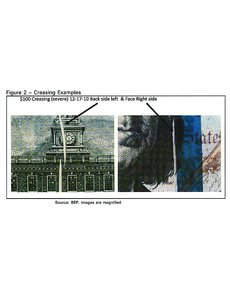 Images from the Treasury Department Office of Inspector General audit report made public Jan. 26 show magnified view of examples of the chronic creasing on the face and back of colorized Series 2009 $100 Federal Reserve notes.

The delayed introduction of Series 2009 $100 Federal Reserve notes was “a production failure that potentially could have been avoided,” according to the results of an audit conducted by the Department of the Treasury Office of Inspector General and made public Jan. 26.

The audit was conducted by the OIG Office of Audit and Office of Investigations “to address significant problems encountered by BEP in the production of the NexGen $100 notes and in response to a request from the [Treasury] Department’s Assistant Secretary for Management and Chief Financial Officer.”

The report continues: “Accordingly, before resuming full production of the NexGen $100 note, we recommend that BEP complete production validation tests to ensure technical problems are resolved. BEP should also implement a comprehensive and integrated project management function for the NexGen $100 note program, as well as for future note designs. In addition, we recommend that BEP, in coordination with FRB, complete a comprehensive cost-benefit analysis before making decisions related to the disposition of the NexGen $100 notes that have not been accepted by FRB.”

The production problems led the BEP to suspend the manufacture of the notes and the Federal Reserve Board to delay the notes’ initial issuance, planned for February 2011.

According to a footnote in the audit report, the “FRB entered into an agreement with BEP in 2009 for the fiscal year 2010 currency order and agreed to pay $117.98 per 1,000 NexGen $100 notes upon acceptance. Based on the established rate, the charge for the approximate 1.4 billion notes produced is estimated at $165 million. Although FRB has not accepted delivery of these notes, they paid a surcharge that included the costs for producing the notes.”

The designs for the denomination were publicly unveiled April 21, 2010. Plans to release the notes into circulation were set for Feb. 10, 2011. However, in October 2010, Federal Reserve Board officials announced the release would be delayed due to continuing sporadic creasing of the paper during printing. (See full timeline for project on page 18.)

In addition to the sporadic creasing of the paper, discovered in November 2009, a second printing flaw, called “crow’s feet,” was identified in September 2010 during manual/visual inspection of some of the 1.4 billion Series 2009 $100 FRNs already printed but not accepted by the Federal Reserve Board. (See story on Page 24.)

The new design incorporates a wide blue 3-D security ribbon, an optically variable device, featuring multiple, shifting images of a bell and the inscription 100. The thread is clearly visible on the face of the note.

The ribbon, which is woven into the paper when it is made, represents a new form of technology not previously used on any U.S. paper money.

The ribbon was developed by Crane, of Dalton, Mass., the firm that has had an exclusive contract to supply currency paper to the BEP since 1879. The OVD technology is named Motion.

According to the audit report, BEP officials indicated, “The decision to address technical problems during production resulted in, among other things, ongoing modifications to the currency paper by BEP’s supplier. BEP officials told us that while no root cause of the creasing problem has been determined, there is a correlation between some of the modifications the supplier made during its currency paper manufacturing process and the propensity of the notes to crease.”

(1) Ensure that BEP completes production validation in conjunction with FRB on an agreed-to limited initial production quantity of NexGen $100 notes, and that technical problems are resolved before resuming full production.

(2) Ensure BEP implements a comprehensive, integrated project management function, in conjunction with FRB, Secret Service and other relevant stakeholders, for the current NexGen $100 note program and other future note designs.

(3) Ensure that before awarding a contract to purchase single-note inspection equipment, BEP completes a comprehensive cost-benefit analysis including all costs, benefits and risks of the available options for the disposition of the approximate 1.4 billion finished notes that have not been accepted by FRB.

Among other things, the analysis should consider the capability of the single-note inspection equipment to ensure notes meet quality standards for acceptance by FRB, as well as costs associated with things such as false rejects and labor. The option selection should be agreed to by all parties (FRB, Secret Service) and be made as expeditiously as possible, according to the report’s recommendations. ¦