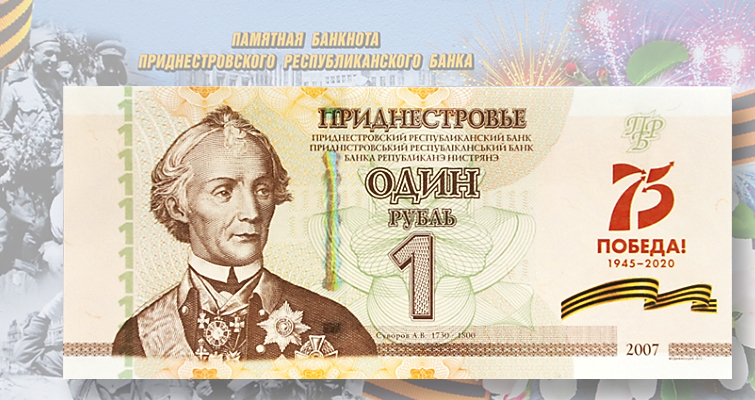 The Transnistrian Republican Bank issued a circulating commemorative bank note on May 6 with a face value of 1 ruble in recognition of “75 years of the Great Victory” in World War II.

The Transnistrian Republican Bank issued a circulating commemorative bank note May 6 with a face value of 1 ruble in recognition of “75 years of the Great Victory” in World War II.

Transnistria is also know as Trans-Dniester or by its official name, the Pridnestrovian Moldavian Republic. The 1,500-square-mile enclave of 530,000 people on a narrow strip of land between the Dniester River and the Ukrainian border broke away from Moldova in 1992 and is not recognized by the international community. It receives financial, military, and political support from Russia.

The note is limited to a run of 2,500 pieces, each packaged in a booklet. It is nearly identical to the 2012 issue, except for two added elements on the right side, the logo of the 75th anniversary of victory celebration and the St. George ribbon. The ribbon is a Russian military symbol of valor and remembrance that has gained popularity in recent years as an emblem of support for Russia (and notoriety for the same reason in places such as Ukraine and the Baltic states).

Perhaps fittingly, the portrait on the note’s face is of the 18th century Russian military leader and tactician, Alexander Vasilyevich Suvorov, later Count Rimniksky, a hero in Russian wars with Turkey, Poland, and France. He was the last Generalisimo of the Russian Empire, the exalted military rank later assumed by Stalin for himself. 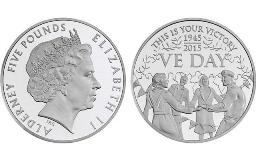 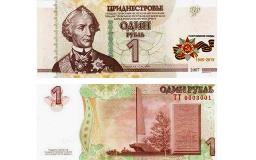