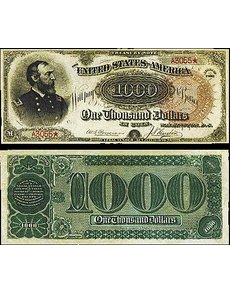 This Series 1891 $1,000 Treasury or coin note sold for $2,585,000 in the Heritage Auctions Platinum Night Auction April 26 during the Central States Numismatic Society convention. The back bears an “open back” design.

All images courtesy of HeritageAuctions.com.

Individually, the three notes garnered the highest prices ever realized at auction for U.S. paper money, according to Heritage.

The three notes were among the 2,020 lots of paper money sold (out of 2,230 lots offered, or 90.6 percent) during the CSNS convention at the Renaissance Schaumburg Convention Center Hotel in Schaumburg, Ill. Prices realized for the paper money auction totaled $14,985,699.

The Series 1891 $1,000 Treasury or coin note in the auction, graded Extremely Fine 45 Premium Paper Quality by PCGS Currency, sold for $2,585,000. The note is cataloged as Friedberg 379c in Paper Money of the United States by Arthur L. and Ira S. Friedberg.

The face of the note depicts a portrait of Union Army Major Gen. George Gordon Meade, very ornate engraving and a small red, scalloped Treasury seal. The design on the back is known as an “open back” design.

The signatures of Register of the Treasury James F. Tillman and Treasurer of the United States Daniel N. Morgan appear on the note.

A very scarce “Grand Watermelon” Series 1890 $1,000 Treasury or coin note sold for $1,527,500. It was graded Apparent Extremely Fine 45 by PCGS Currency due to “some expertly executed restoration of the top margin area and a scattering of virtually undetectable closed pinholes,” according to the catalog description.

This note, cataloged as F-379a, got its nickname because the back design features three green zeros in the denomination 1000 that resemble watermelons.

The face of the note is generally similar to designs used on the Series 1891 note. It also features the portrait of Meade, but has a large brown, spiked Treasury seal. The signatures of William S. Rosecrans as register of the Treasury and J.N. Huston as treasurer of the United States appear on this note.

Treasury or coin notes have fewer series, varieties, signatures and seals than any other kind of U.S. paper money. These notes were issued under the Legal Tender Act of July 14, 1890, which authorized the Treasury secretary to issue the notes in payment for silver bullion purchased by the Treasury department, according to the Friedberg book. The notes were redeemable in actual coin, “but whether silver or gold coin should be paid out was left to the discretion of the Secretary of the Treasury,” according to the Friedberg book.

After the auction, Dustin Johnston, director of auctions for Heritage, said that at least four bidders had placed bids on each of the lots.

He said the reason the Series 1890 $1,000 Treasury note garnered the bid it did was because it is “one of two known in private hands and is considered one of the most iconic designs on U.S. currency.”

Johnston said the Series 1891 $1,000 Treasury note is “unique in collector hands” with the only other known survivor in the Smithsonian Institution’s National Numismatic Collection.

A Series 1863 $100 gold certificate, F-1166c, realized $2,115,000 in the auction. “Three examples of this note are known to exist, two of which reside in the Smithsonian Institution,” making the note in the auction the only example available to collectors, according to the Heritage lot description. The note is graded PCGS Currency Apparent Extremely Fine 40.

“Overall, the top notes in our auction performed very well, some of them exceeding prices set at the height of the market in 2008,” Johnston said. “There is solid demand for large- and small-size rarities.”

The $10 note, F-114, features a large vignette of a bison on the face, flanked by portraits of explorers Meriwether Lewis and William Clark. The note is graded Very Fine 30 Premium Paper Quality by PCGS Currency.