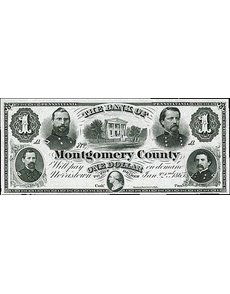 This uniface example of a $1 obsolete bank note remainder was produced for the Bank of Montgomery County in Norristown, Pa. The portraits of four Civil War soldiers, all with ties to Norristown, provide a human link to collecting.

Sometimes some of the more common obsolete notes yield interesting information. Take, for example, the $1 note issued in January 1865 by the Bank of Montgomery County located in Norristown, Pa. Collectors have long been familiar with this attractive note that features Union military officers.

Remarkably, all had some tie to Norristown. Starting clockwise from the lower left corner of the note, the following officers are portrayed:

Col. John W. Schall was educated in Norristown before entering a military academy in Norwich, Vt. During the Civil War he was associated with several different regiments of Pennsylvania Infantry. He finished his enlistment as a colonel with the Army of the Potomac, 6th Army Corps, being wounded at Cold Harbor. After the war, he returned to Norristown where he worked in the iron business, was appointed U.S. postmaster and served as a general in the Pennsylvania National Guard. Schall died in 1920 at the age of 86.

Gen. Adam J. Slemmer (often misidentified as “Clemmer” in numismatic publications) was raised in Norristown and had a distinguished career, serving in the Seminole Wars, the Civil War and the American West. At the outbreak of the Civil War he successfully defended Fort Pickens in Pensacola, Fla., until relieved in 1861. He received an incapacitating wound at the Battle of Stones River in Tennessee in December 1862. He served in several administrative roles thereafter. He died in 1868 while in command at Fort Laramie, Wy., and is buried near Norristown.

Gen. Winfield Scott Hancock is the best known of those featured. He lived and was educated in Norristown, and went on to the United States Military Academy. He served with distinction in the Mexican-American War, the Civil War (a key figure in the Union victory at Gettysburg), and, like Slemmer, the American West. He was narrowly defeated by Garfield in the 1880 presidential election. He died in 1886 at the age of 61.

The final officer honored was Gen. John F. Hartranft, who participated in numerous battles during the Civil War and won the Medal of Honor. He was active in business and civic affairs in Norristown both before and after the war. He served as governor of Pennsylvania from 1873 to 1879 and died at the age of 58 in 1889 at Norristown.