Paper money of the American Revolution 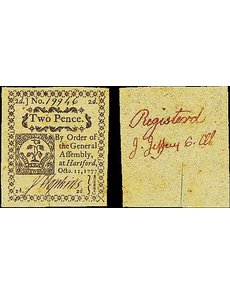 In October 1777, the Connecticut General Assembly approved issuing the smallest size and denomination notes released during the American Revolution, two pence notes, for small-scale transactions, in place of hoarded coins.

In 1777, there just wasn’t much money floating around.

Specie, coins made from gold and silver, had been hoarded since the beginning of the struggle against England.

Paper money issued by both states and the Continental Congress had taken over, but in the two years since the war started, its value had started to deflate quickly.

The distrust of paper money that this engendered meant that even lowly coppers started to be hoarded, which made small scale transactions well nigh impossible.

Connecticut tried to remedy this problem with the only solution left: more paper.

In October 1777, the state assembly resolved, “whereas small bills are much wanted for change in currency,” to issue a series of very small bills of credit.

The smallest Continental denomination printed was $1/6 (0.1666 of a Spanish milled dollar).

Connecticut’s June 1776 emission had included notes as small as six pence (.08333 of a dollar) and nine pence (.125 of a dollar, or equal to a Spanish real), but the small-scale economy demanded something smaller still.

The notes were physically unimpressive.

Printed on one side and measuring about 2 3/4 inches by 2 inches, the notes simply stated the denomination, “by Order of the General Assembly, at Hartford, Octo. 11, 1777,” accompanied by a state seal, the denomination repeated in small print in each of the four corners, and a single signature.

Two of the men appointed by the Assembly to sign the tiny notes went on to form the Company for Coining Coppers.

The two-pence note, the smallest denomination authorized and the single smallest paper issue of the Revolutionary War era, was worth just 2/72 of a Spanish milled dollar, or about 2.8 cents, at the time of its issue.

As paper further devalued against the Spanish milled dollar after 1777, these already near-worthless notes became worth even less.

Most were eventually returned to the state Treasury and redeemed, receiving a cut from the bottom margin that canceled them.

Today, these small change notes are common, particularly the ones that are slash canceled.

They are inexpensive and not avidly sought after, despite their status as the most coin-like paper money of the American Revolution.