The 2007 Bridge notes of Scotland 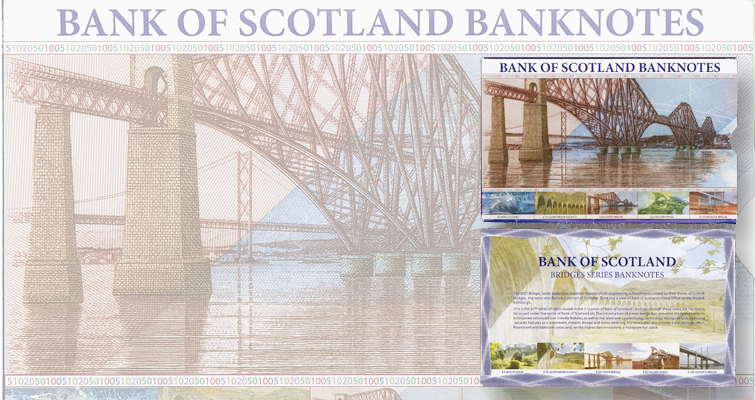 The five denominations of Bridge notes were made available to collectors in special commemorative packaging. 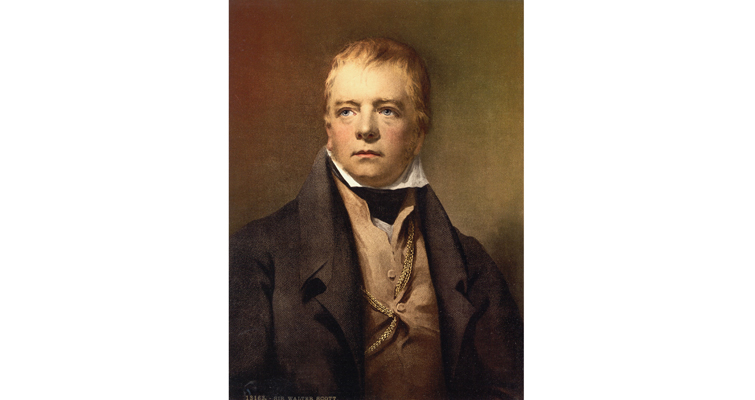 A portrait of Scottish novelist and poet Sir Walter Scott appears in common on the faces of the five denominations of Series 2007 Bridge notes, next to an image of the Bank of Scotland’s Head Office 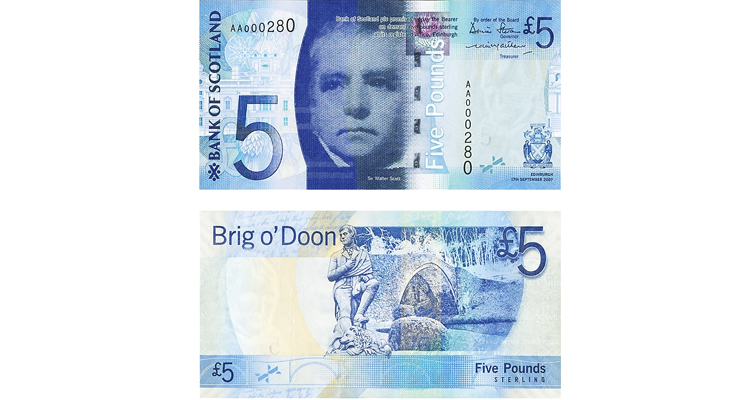 Spanning the Doon River near Alloway in South Ayrshire, the Brig O’Doon on the back of the £5 note is a single-arch stone bridge. 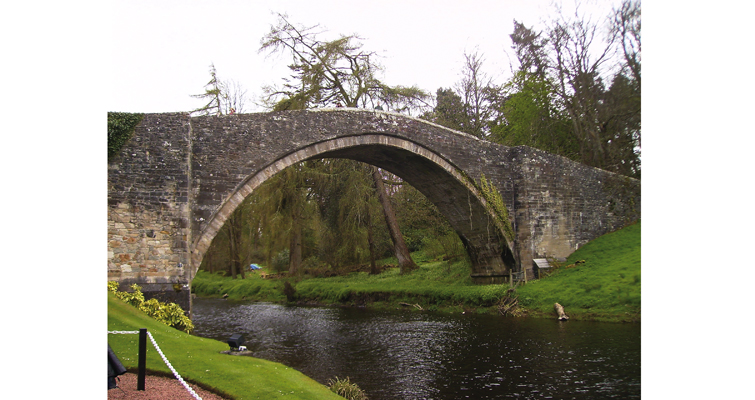 The Brig O'Doon bridge lent its name to Alan Jay Lerner and Frederick Loewe’s Broadway musical Brigadoon, first staged in 1947 and adapted into a successful film by MGM in 1954. 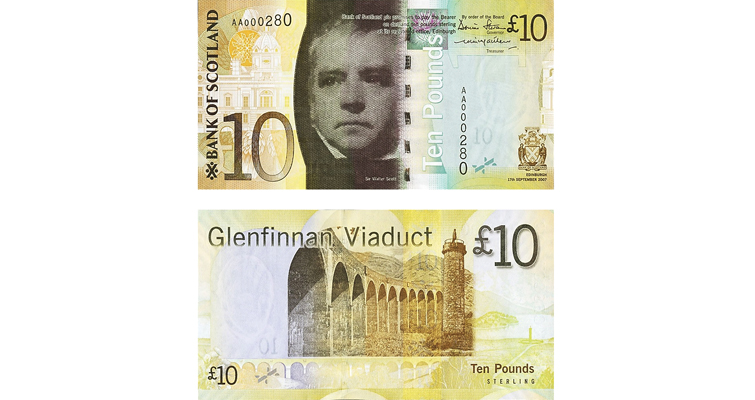 At the time of its construction, the Glenfinnan Viaduct was one of the largest concrete engineering projects ever undertaken. 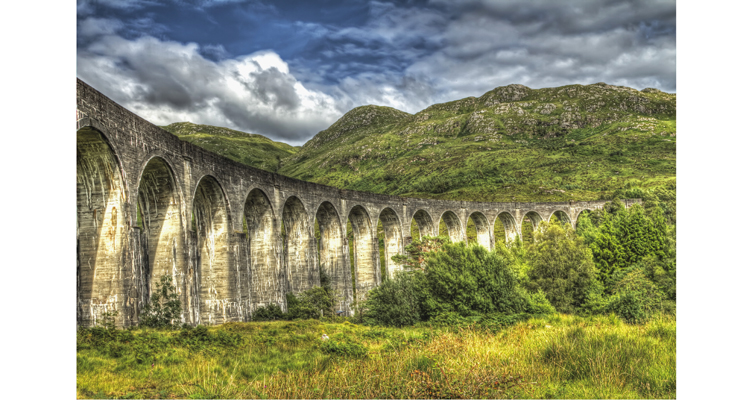 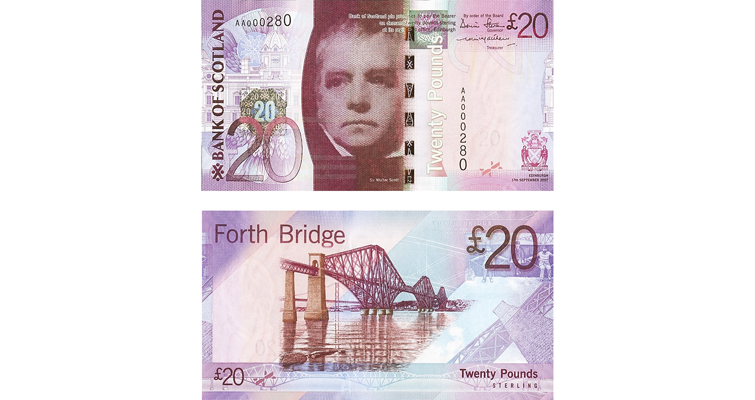 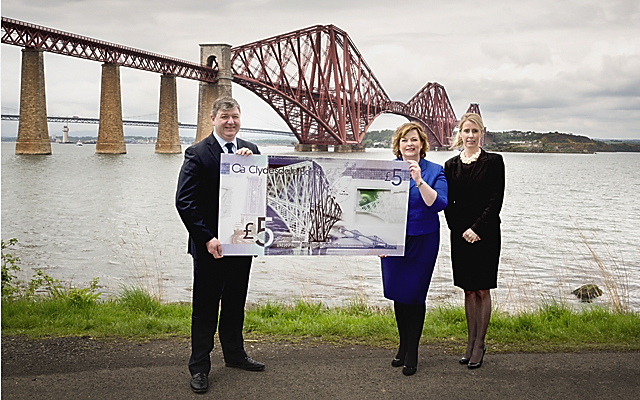 Designed by Sir John Fowler and Sir Benjamin Baker, the Forth Bridge took seven years to build, beginning in 1883. 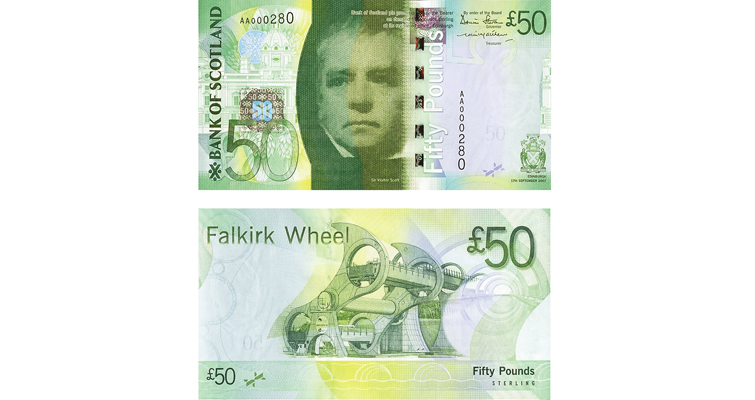 The world’s only rotating boat lift, the Falkirk Wheel is depicted on the back of the Series 2007 £50 note. 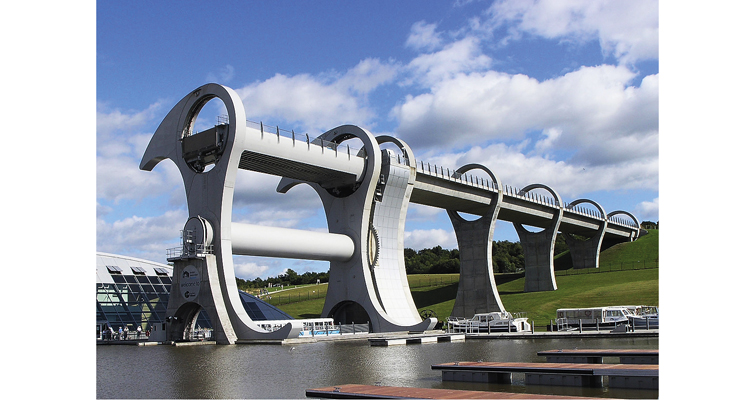 The centerpiece of the multi-million pound Millennium Link Project, the Falkirk Wheel reconnects the Forth & Clyde Canal with the Union Canal — thus restoring waterway navigation between Glasgow and Edinburgh 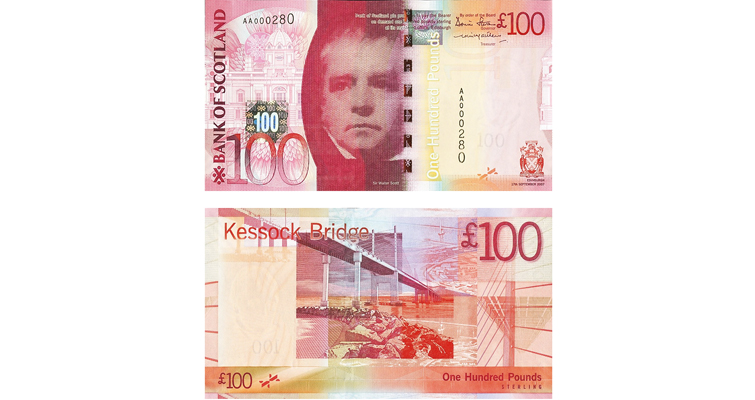 The Kessock Bridge on the highest denominatin of the 2007 Bridge notes carries the A9 trunk road between Inverness and the Black Isle. 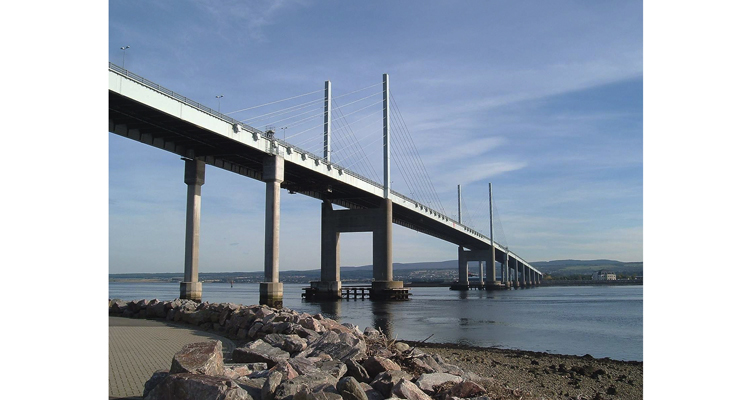 Built between 1976 and 1982, Kessock Bridge is a cable-stayed road bridge spanning the Moray and Beauly Firths.

The Bank of Scotland in 2007 introduced a series of notes denominated in pounds that pay homage to the country’s many beautiful and historic bridges and the engineering achievements employed to erect them.

The Bank of Scotland became a subsidiary of Lloyds Banking Group Jan. 19, 2009.

The Bridges series of Scottish paper money was introduced into circulation on Sept. 17, 2007.

The notes conform in color and size to previously issued notes, but the typeface of the text on the newer notes is larger and modernized, along with enlarged, raised numerals for the denominations to make differentiation easier for the visually impaired.

The face of each note in the series features a portrait of Sir Walter Scott next to an image of the Bank of Scotland’s Head Office on the Mound in Edinburgh.

Scott (born Aug. 15, 1771, died Sept. 21, 1832) was, according to Encyclopædia Britannica, “a Scottish novelist, poet, historian, and biographer who is often considered both the inventor and the greatest practitioner of the historical novel.”

Tiring of poetry, Scott, in 1813, rediscovered the unfinished manuscript of a novel he had begun eight years earlier.

Scott eventually completed that novel in 1814, and published it with the title Waverley. It was a retelling of the Jacobite rebellion of 1745.

After writing a number of novels between 1813 and early 1819, Scott penned Ivanhoe, a novel set in 12th century England that today remains his most popular book. The historical romance follows the life of Sir Wilfred of Ivanhoe, a fictional Saxon knight in love with Rowena, who is betrothed to another.

In addition to individual notes of the series entering circulation, sets in special commemorative packaging containing notes representing all five denominations were made available to collectors.

According to the information on the back of the numismatic product packaging for the notes, “The introduction of a new design has provided the opportunity to incorporate advanced user-friendly features, as well as the latest anti-counterfeiting technology. Alongside such traditional security features as a watermark, metallic thread and micro-lettering, the new notes also include a see-through effect, fluorescent and iridescent areas and, on the higher denominations, a hologram foil patch.”

The 2007 series was designed by bank note printer De La Rue, in partnership with the Bank of Scotland.

Heritage Auctions sold two complete sets of the Uncirculated notes housed in the special commemorative packaging, official presentation folders, with the notes bearing matching serial numbers. One set sold in a March 11, 2014, sale for $446.50 and the second set for $423 a week later.

Collectors unable to acquire one of the 1,000 sets could still assemble their own five-notes sets at face value from circulation, albeit finding matching serial numbers from circulation would be unlikely.

The Series 2007 £5 note features on its back the Brig O’Doon, originally constructed during the 14th century, although some sources suggest the 15th century.

Spanning the Doon River near Alloway in South Ayrshire, the Brig O’Doon is a single-arch stone bridge.

The structure was made famous by Scottish poet and lyricist Robert Burns in the final verse of his epic 1790 poem Tam O’ Shanter.

The bridge lent its name to Alan Jay Lerner and Frederick Loewe’s Broadway musical Brigadoon, first staged in 1947 and adapted into a successful film by MGM in 1954.

Some sources suggest Brig O’Doon was actually built by James Kennedy, a 15th century Roman Catholic bishop who was the last man to govern the diocese of St. Andrews solely as bishop.

The bridge has been repaired many times since its original construction with the most recent work in 1978.

The result is that the original stones and subsequent patching work don’t match. In 1816, another single-arch stone bridge was erected downstream of the old one to accommodate increasing traffic from the public road that now crosses the new structure, called River Doon New Bridge.

Built between 1897 and 1901 by Sir Robert McAlpine, based on designs by engineer W.S. Wilson, the Glenfinnan Viaduct depicted on the back of the Series 2007 £10 note was considered at the time of its construction to be one of the largest concrete engineering projects ever undertaken.

McAlpine, as overseer of Robert McAlpine & Sons, earned the nickname “Concrete Bob” for his use of massive amounts of concrete in his construction projects.

Concrete was employed because of obstacles in trying to quarry the hard schist in the region. Running a quarter-mile long, the Viaduct carries the West Highland Railway line between Fort William and Mallaig.

The bridge was constructed to carry the North British Railway line the 1.5 miles across the Firth of Forth, from South to North Queensferry.

A “firth” is a term for a large sea bay, or even a strait.

The Forth Bridge features three cantilever towers, each 341 feet high. The bridge carries the railway tracks 148 feet above the high tide of the Forth.

To distinguish it from the Forth Road Bridge, the Forth Bridge is sometimes referred to as the Forth Rail Bridge, although that has never been its official name.

The Forth Bridge is also depicted on the face of the Series 1959 National Commercial Bank of Scotland Limited £1 note.

A Superb Gem Crisp Uncirculated example sold in a March 2010 sale by Heritage Auctions for $53.

A Paper Money Guaranty Choice Uncirculated example of the Series 1962 £1 note, depicting the Forth Bridge on the face, sold in a July 2014 Heritage sale for $52.

The Forth Bridge also appears on the back of a Series 2015 £5 polymer commemorative note issued by Clydesdale Bank in Scotland to mark the 125th anniversary of the bridge’s opening.

The Forth Bridge is recognized as a UNESCO World Heritage Site.

The world’s only rotating boat lift, the Falkirk Wheel, is depicted on the back of the Series 2007 £50 note.

In its description for the note’s back design, Bank of Scotland explains, “The centrepiece of the multi-million pound Millennium Link Project, the Wheel reconnects the Forth & Clyde Canal with the Union Canal — thus restoring waterway navigation between Glasgow and Edinburgh.

“The huge wheel, 35 metres across, is made up of two diametrically opposed arms. At the end of each is a giant, water-tight caisson with a capacity of 80,000 gallons.

“Despite the fact that it can lift over 600 tonnes, relatively little energy is required to rotate the wheel. As each side is perfectly counterbalanced, when one caisson full of water and boats is lifted, the other is simultaneously lowered.”

The Kessock Bridge, connecting Inverness to the Black Isle over the A9 trunk road, is the featured vignette on the back of the Series 2007 £100 note.

Built between 1976 and 1982, Kessock Bridge is a cable-stayed road bridge spanning the Moray and Beauly firths.

According to the Bank of Scotland’s description of the note design, “the bridge’s four towers support 64 spiral strand steel cables, elevating the roadway high above the water. Modelled on a bridge spanning the Rhine near Düsseldorf, the Kessock Bridge has been designed to withstand the punishment of high seas, strong winds, and, as the bridge straddles the Great Glen Fault, even earthquakes.”

The bridge has a total length of 3,465 feet, with a main span of 787 feet. To protect against seismic activity of the Great Glen Fault, the bridge is outfitted with seismic buffers installed at the time of construction.

If you’re a paper money collector interested in bridge motifs, you may want to consider acquiring examples of these Bridge notes for your collection. 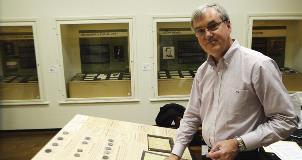