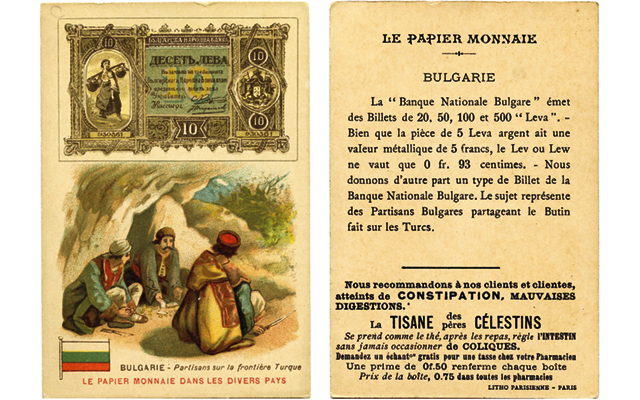 Tea trade cards featuring images of bank notes of different countries are among the off-the-beaten-path numismatic collectibles available for those who want to hunt for something a bit different.

Almost every collector who has a bad case of the “disease” collects a number of different things.

I currently collect Midwestern obsolete notes, certain Confederate States of America notes, and a smattering of world notes that strike my fancy.

But then, well, there are some other things.

You get the idea; there are few things that I’ve run across that I don’t collect to one degree or another.

One such area is so-called “trade cards” that depict coins and paper money. First introduced when color lithography made colorful incentive premiums both cost effective and popular, these little pasteboard pieces were popular in both Europe and the United States beginning in roughly the mid-1870s.

One of my favorite series was done by the French makers of the “Herbal Tea of the Celestine Fathers.”

According to the advertisement on the back of a card in my collection, this tea was to be taken after meals and promised to cure constipation and digestion problems without causing colic. It sold for .75 franc.

As an incentive to purchase more boxes of tea, the company included a colorful trade card depicting the citizens, flag, and a bank note from one of a number of different countries in each box.

I’m not certain how many cards comprised a complete set, but I have examples from Austria-Hungary, the United States, Portugal, the Netherlands, Greece, France, Bulgaria, and Belgium.

With countries like Great Britain, Germany, Spain, Russia, and Italy not represented in my collection, I assume that the entire series must have been a great deal larger.

In addition to the ad on the back of each card, the details of the country’s bank note issues are also discussed.

Like so many interesting collectibles, these are not particularly expensive, going for a few dollars apiece.

Finding them is sometimes another matter, but eBay and paper collectibles/postcard shows often will yield some hidden treasures.

Cards depicting coins are even more numerous and are also fun to collect.