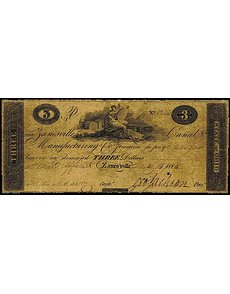 Notes from the Zanesville Canal and Manufacturing Co. are rare, with but a few fractional scrip notes and a lone $3 note, shown above, representing the enterprise, which survives today, in a sense, as an educational fund.

The Zanesville Canal and Manufacturing Co. at first blush seems to fit the mold for many early Ohio businesses involved in banking.

The company had originally been chartered by the state in 1812 to construct a dam and canal on the Muskingum River. The dam was completed in 1815, the same year that the company’s founder, John McIntire, passed away.

McIntire was also the founder of Zanesville. The city was founded as the town of Westbourne in 1797 on land McIntire acquired from his father-in-law, Col. Ebenezer Zane. Westbourne’s postmaster changed the town’s name to Zanesville in 1801, two years before Ohio attained statehood.

The short canal was not completed until 1818. The company’s banking activities were not particularly successful, with the bank failing during the hard financial times of 1820 and 1821, which caused the death of many of Ohio’s undercapitalized banks.

At this point, one might wonder, “Oh well, what else is new?” After all, bank failures were the norm during these turbulent financial times. Banks that survived were the real exceptions.

But in doing some further research, I came across the startling fact that the firm, in a sense, still lives on due to the philanthropy of John McIntire, via the John McIntire Educational Fund. In his will, McIntire funded scholarships for “the poor youth of Zanesville.”

Today, the fund has assets of more than $5 million and the name of the Zanesville Canal & Manufacturing Co. still appears on corporate donor lists. The “company” is still administered to this day by trustees and annually awards scholarships to college students who reside within the city limits.

Notes from the concern are rare, with but a few fractional scrip notes and a lone $3 note representing the enterprise.

It would be interesting to research other banks to determine if the founders established similar funds that keep the names of the company or the founder alive long after their demise.

My discovery was made quite by accident poking around Google, so you might want to give it a try, to see if any of your local bankers were well known benefactors.