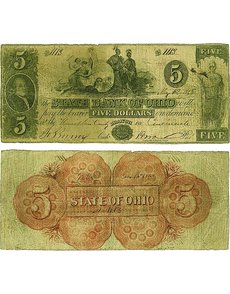 In June I had the pleasure of again attending the Memphis, Tenn., International Paper Money Show or, as it is known to most paper money collectors, simply “Memphis.”

The show allowed me to again meet old and new friends, enjoy barbecue, and even find a few new notes for my collection. As I was going through Don Fisher’s inventory of Ohio obsolete paper money I happened across a note that at first struck me as yet another counterfeit $5 on the State Bank of Ohio.

All the diagnostics were there — Benjamin Franklin’s portrait looked more like that of an axe murderer, and the back contained a big blunder. Instead of boldly displaying state bank of ohio, mine simply said state of ohio, because the counterfeiter had miscalculated and not left enough room for the entire text. OK, that was interesting enough, but then I looked at the face to see which branch was the supposed issuer of this note. To my surprise, the branch name was neither of the two branches that are known for the city, but rather the “Hamilton County Branch.” One small problem here: there was no Hamilton County Branch of the State Bank of Ohio. The counterfeiter had apparently been either too lazy or too careless to verify this information. As a result, his efforts were easily detected by anyone exercising even minimal care.

The counterfeiter’s credo was “it doesn’t have to be perfect, the counterfeit needs to be good enough to pass under ideal circumstances — poor lighting, a crowded store, an inexperienced clerk, or other similar situations.”

The note is pretty heavily circulated, so it must have fooled at least a few people, but the two seemingly minor mistakes the counterfeiter made did not make the job of passing these notes any easier.

Those of us who collect obsolete paper money enthusiastically collect these contemporary counterfeits along with our “regular” notes. Some are clumsy efforts that should not have fooled anyone, while others are very deceptive. They’re all part of the complex field of obsolete paper money. If you’re looking for something new to collect, you might want to consider contemporary counterfeits. They’re lots of fun and historic as well.