Surviving from the past 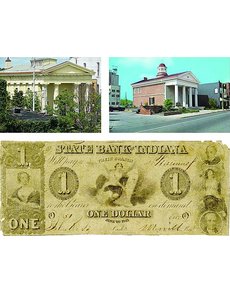 When dealing with obsolete paper money, one of the things that you usually have to accept is that not many tangible links to the past other than the bank notes themselves survive.

Unlike today, most banks were located in the most remote inhospitable areas available. Many times, the “banks” were actually housed in places like a trunk in someone’s living room. In short, it was often in a poorly capitalized bank’s best interests to be almost impossible to find. That way, notes that were “coming home to roost” could not be easily presented for payment. But not all banks found themselves in such predicaments.

The State Bank of Indiana began operations in 1834 and eventually was represented by 13 branches that covered most portions of the state. The bank was quite conservative and successful, and the branch offices were located in cities and towns that actually had commercial significance as the state developed. Based on the three branch buildings that I am aware are still standing, the architecture tended toward the Greek Revival style, with imposing pillars a prominent feature.

“Construction of this building was begun in July 1838. The State Bank moved into this building upon its completion in November 1838. The bank’s facade is an imitation of the front of a Greek temple, known as the Greek Revival Style. …”

The website continues, “of interest in the main room is the original hand-riveted steel vault. The vault measures 6 feet by 8 feet and is 7 feet high. It is encased in stone walls 2.5-feet thick. Two keys were required to open and lock the vault. ... The room directly behind the main room was also used in conducting bank business. The bank’s charter allowed it to take furs and produce in exchange for cash. This room may have been used for those transactions.”

Visiting these historic sites can give you great insights into banking as it was practiced in antebellum America.

Why not see if there are any surviving sites in your state? Your state historical society can undoubtedly aid your search.