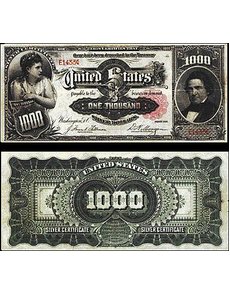 This Series 1891 $1,000 silver certificate, the only known example in private hands, was reportedly sold for a record $2.6 million.

A Series 1891 $1,000 silver certificate, one of only two examples known and the only example in private hands, has been reported sold in a private transaction for a record $2.6 million.

Stack’s Bowers Galleries officials announced June 11 that the note was one of five notes sold privately from a collection containing more than 85 notes of various types, series and denominations.

The seller of the $2.6 million note and the buyer wish to remain anonymous, according to Stack’s Bowers officials.

The transaction was “assisted and facilitated,” according to Stack’s Bowers, by Sergio Sanchez Jr. from Sergio Sanchez Rare Coins and Currency in Miami.

The remaining notes in the collection have been consigned to the Stack’s Bowers auction to be held in conjunction with the American Numismatic Association World’s Fair of Money in Rosemont, Ill., in August.

The record-setting note is illustrated in earlier editions of Paper Money of the United States by Arthur L. Friedberg and Ira S. Friedberg, where it is cataloged as Friedberg 346e. It bears serial number E1433 followed by a stylized flourish, all in red ink, as is the scalloped Treasury seal.

According to The Comprehensive Catalog of U.S. Paper Money by Gene Hessler, the E1433 note was once in the collection of Texas newspaper publisher Amon G. Carter Jr.

The Smithsonian’s Crisp Uncirculated note, the first Series 1891 $1,000 note printed by the Bureau of Engraving and Printing, became part of the National Numismatic Collection in 1978 when it was transferred from the Treasury Department, according to Smithsonian records.

Both known examples of Friedberg 346e notes bear the signatures of James F. Tillman (signed J. Fount. Tillman) as register of the Treasury and Daniel N. Morgan (signed D.N. Morgan) as treasurer of the United States.

The face and back of Friedberg 346e were designed by bank note engraver Thomas F. Morris, with various engravers generating the various elements used on the face and back.

A rendition of Liberty, based on an original image that engraver Charles Burt originally executed in 1877 for a $1,000 bond, appears on the left of the face of Friedberg 346e.

G.F.C. Smillie re-engraved the Liberty portrait for the Series 1891 $1,000 note, according to Hessler.

On the right side of the Series 1891 note is a portrait of American statesman William L. Marcy. The portrait of Marcy was engraved by bank note engraver Charles Schlecht, according to Hessler.

According to Hessler, nonportrait engravers working on the note were D.M. Cooper, J. Kennedy, S.B. Many, W. Ponickau and G.U. Rose Jr.

Before entering state politics, Marcy served as a schoolteacher, newspaper editor and more steadily, a lawyer.

During his stint in New York state politics, Marcy was the leading member of the Albany Regency, a group of politicians who controlled state politics between 1821 and 1838. Marcy also was adjutant-general of the New York State Militia from 1821 to 1823.

In total, 8,000 of the Series 1891 $1,000 silver certificates were reported to have been printed, with only 5,600 of the total officially issued into circulation, according to Hessler. ¦