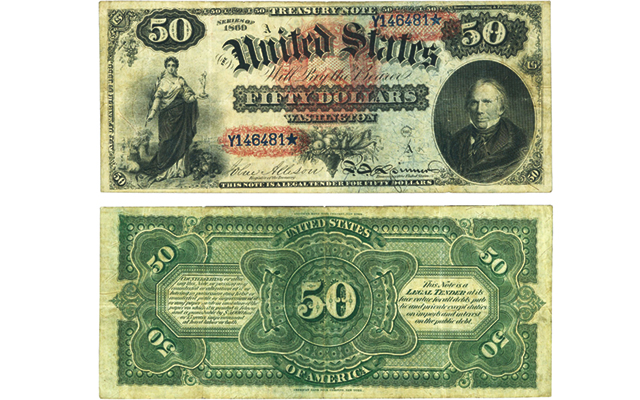 This rare Series 1869 $50 United States notes will be offered in the Stack’s Bowers Galleries official auction of the Whitman Coin & Collectibles Expo in Baltimore, Md., Oct. 29 to Nov. 1, 2014.

A rare Series 1869 $50 United States note will be offered in the Stack’s Bowers Galleries official auction of the Whitman Coin & Collectibles Expo in Baltimore Oct. 29 to Nov. 1, 2014.

The 1869 series of United States notes (once called legal tender notes) are referred to as the “Rainbow” series because of colorful hues of the inks used to print the notes. Denominations range from $1 to $1000.

The note in the auction is cataloged as Friedberg 151 in Paper Money of the United States by Arthur L. and Ira S. Friedberg.

A portrait of Henry Clay appears at right on the face of the $50 note. Clay represented Kentucky in the U.S. House of Representatives and the U.S. Senate. He also was the ninth U.S. secretary of state, serving in the President John Quincy Adams administration.

The vignette on the left of the face is known as Return of Peace and depicts Columbia carrying a palm branch and a miniature statue of Mercury.

For more information about the note or the auction visit the firm’s website.