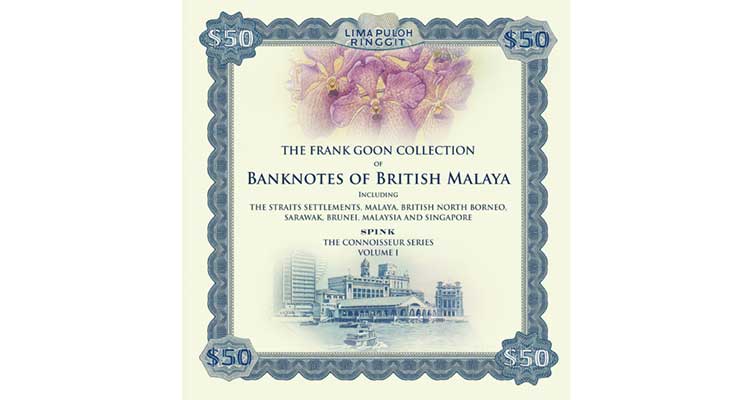 The second edition of a book about Malayan and Asian bank notes is being released on Aug. 15.

The long-awaited second edition of Banknotes of British Malaya, The Frank Goon Collection including The Straits Settlements, Malaya, British North Borneo, Sarawak, Brunei, Malaysia and Singapore, by Frank Goon, is set to be released on Aug. 15.

Published by Spink, the second edition is a masterpiece and a testament to a lifetime of banknote collecting. It is also the first volume in the Spink Connoisseur Series, a must for any collector of the Straits areas and a seminal reference work.

Frank Goon’s love of collecting began at an early age, his curiosity piqued at the sight of older boys using Japanese Banana money as “monopoly” money, as, after the Second World War, these notes had very little value.

When collecting, his interests began to centre around non-issued notes, in the form of colour trials, essays, partially printed or rare “one-off” notes prepared by the printing houses for the approval of various governments.

Subsequently, his collection includes some of the most beautiful partially printed proofs, meticulously hand-executed essays, specimens and issued notes — some of which are entirely unique!

Spink is delighted to have had a hand in bringing this book to the world, and sincerely hopes that it will be a book for collectors and dealers to use as the ultimate reference work on this beautiful and historic series of banknotes. Every country needs a “Frank Goon” to commend this hobby to the world at such a high level.

For more Information about the book, visit the firm’s website.

Want to read other hobby literature? Check out these Coin World stories?